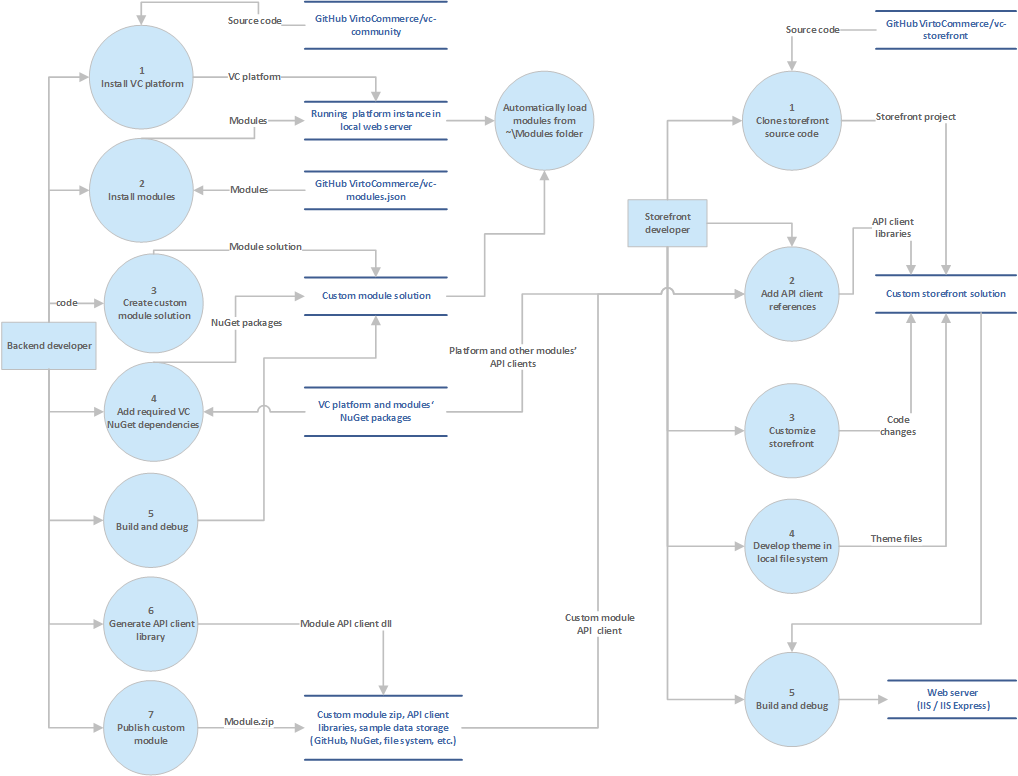 This section describes the main common steps for extending VC platform with a custom module.

Follow the steps described in Source Code Getting StartedВ tutorial.

As a result you'll have a clean (without any modules)В VC platform running.

Clean platform has little business functionality and all its "eCommerce" power lies in external modules. The modules can be retrieved and installed from multiple sources like:

Install the required modules as described in Modules managementВ tutorial.

IfВ some unique functionality (missing in the existing modules) is required, that means you need to create your own extension (a customВ module).

Follow the steps described inВ Creating new moduleВ tutorial. As a result you should have "managed" or "unmanaged" module created.

Note that the project must be located in folder which is mapped to ~/Modules virtual directoryВ in IIS for platform application as on the screen below: 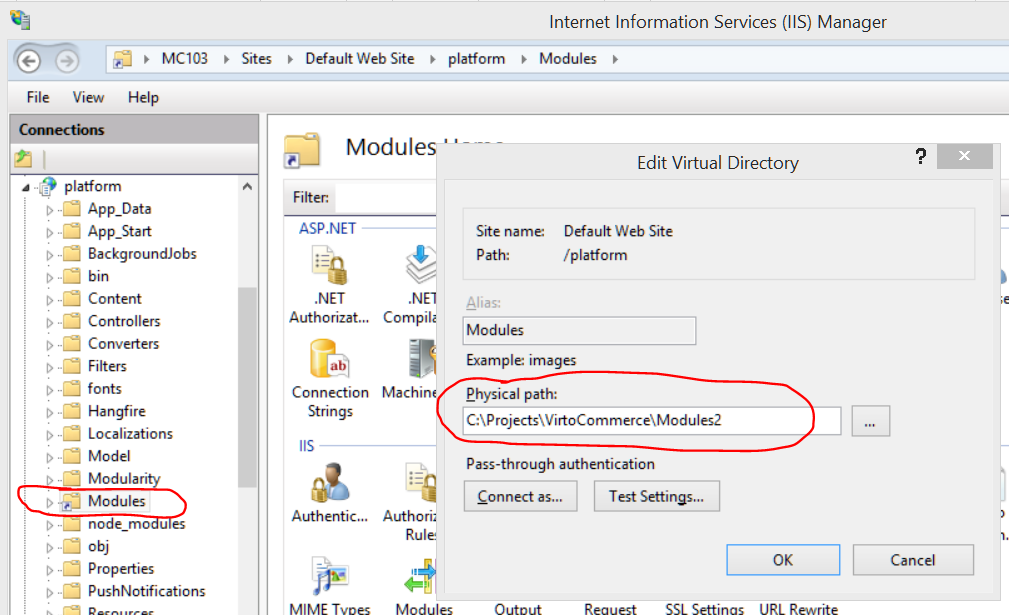 If your custom module will use (or extend) some types, UI or other functionality from other VC module(s), you'd need to: * install it to the platform as described in Step2. Customize platform environment by installing modulesВ above; * add it asВ reference in module's Visual Studio projectВ (usually from NuGet public repository); * add it as dependency in module'sВ manifest (module.manifest file).

If a custom moduleВ exposes any managed codeВ extension point, itВ should be packaged and published as a NuGet package.

ASP.Net File Change Notification feature is disabled in VC Platform app by default. It would be much more convenient to have it enabled while developing your new module. In the VirtoCommerce.Platform.Web project open web.config file. In system.web section find the httpRuntime node and fcnMode attribute. Change its value from Disabled to Default. platform web.config

Set the value back to Disabled in production environment or while testing modules installation.

Step 6. Generate C# client for the API exposed by the module

VC platform has an automatic, build-in generation of swagger documents for all installed modules, which have ASP.NET API controllers.

The module is completed. You should generate a VC module package in order to be able toВ distribute it.В Follow the steps described inВ Creating module packagesВ tutorial andВ generate a package. The resulting packageВ can be installed to other instances of VC platform.

If you'd like to make your module public, we'd be more than happy to add it to public VC modules repository and share it with VC community. Check for details at Process of custom module contributing article.

There can be any number of VC modules installed in VC platform depending on the nature of the solution. SomeВ modulesВ expose public API and each of themВ should have generated API client library package (published and available in public NuGet repository).

In order to use APIs from those other modules, referenceВ the appropriate API client libraries in the storefront (client) project.

Platform update is a process similar to simplified Source Code Getting StartedВ guide:

Virto Commerce platform and modules are developed following Semantic Versioning specificationВ 2.0.0 and modules can be installed to the platform only if they are of compatible versions. Version compatibility rules: