Front End Frameworks for eCommerce in 2022

Have you tried to create a web front end interface using only HTML5, CSS3 and JavaScript? Well, it is not that difficult right now. Some small projects can be easily completed. For large projects such as those typical for ecommerce, you need at least one framework to solve the complexities of user requirements.

Which JavaScript frameworks and libraries are the most promising for 2021? Every developer who reads this article will name at least a few more. However, the article’s volume is finite, and as an author, I can only express my point of view. For my part, I will not mention instruments that are over 15 years old, although some veterans are still in the ranks. And if so, let's go. 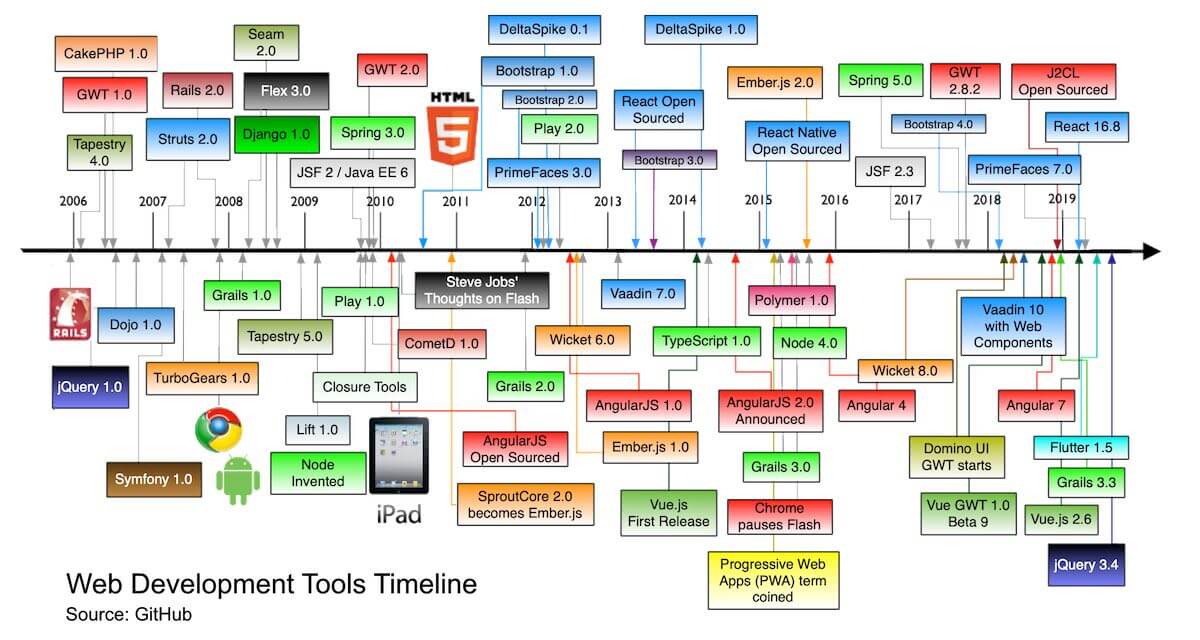 Walking along the Timeline

Just like CSS, JavaScript has come a long way since its browser compatibility issues. It took tremendous effort to get JavaScript to run correctly in all supported browsers.

One of the very first libraries that made working with JavaScript fun was jQuery. It was released in August 2006 and helped developers write JavaScript code without worrying about browser compatibility. The legacy of jQuery continues today as the library is still very popular. It contains many useful features to make any website interactive.

While jQuery continues to be a popular JavaScript library for web interfaces, it lacks the means to process data consistently. Several frameworks were created to solve this problem. Backbone and Knockout are some of the earliest JavaScript frameworks that got their share of popularity.

Angular hit the market in October 2010. It quickly became the most popular JavaScript MVC framework. It offers two-way data binding, dependency injection, routing, and more. Angular helped developers solve many of the problems they faced when creating projects. However, as the complexity of Angular increased, web developers became less charmed with it.

The Angular team decided to redesign the entire framework and named it Angular 2. It just so happened that this new version of Angular 2 was completely incompatible with Angular 1.x. There was no migration path either. Many Angular 1.x developers were frustrated with this approach, prompting them to reject the framework entirely. Angular 1.x is still in use, but no longer enjoys the success it did.

In May 2013, a new JavaScript library called React was presented in the U.S. It was created by Jordan Walker, a software engineer working at Facebook. Audiences were amazed by the many innovative features such as virtual DOM, one-way data flow, and Flux pattern. After the first version of React was announced, this framework began to rapidly gain popularity.

To date, a rich ecosystem of libraries and tools has been built for React.js. Even existing CSS frameworks like Bootstrap have created their own version for React. React.js is a contender for the most popular JavaScript technology in 2022. It's hard to find a library that doesn’t fit your project requirements if you are using React.js.

During the decline in popularity of Angular.js, a new framework similar to Angular 2+ and React began to gain ground. Vue.JS is a progressive framework released in February 2014 by a developer named Evan You who previously worked at Google. Unlike React, which is very flexible, or Angular, which is very complex, Vue finds the middle ground. Vue.js provides a lightweight framework surrounded by an ecosystem with official support from the Vue team.

JavaScript is likely to continue being one of the most popular languages for writing front-end web apps, but it won't always sit atop the pile. There are many smaller technologies shaping how we use JavaScript today and those will slowly whittle away at its dominance.

This is what the last 10 years of JavaScript framework development looked like:

Angular, React, and Vue are very popular for creating a single-page application in ecommerce. These are applications that only run in the browser and access the server for data. They do not download the page from the server but only gather some data, such as the product’s price.

Figuratively speaking, jQuery is the Godfather of all modern frameworks. There are still many teams that maintain both jQuery and AngularJS (see below) because they were prominent for quite some time before momentum began to push them out of popularity in recent years.

jQuery is a JavaScript library designed to simplify HTML DOM tree traversal and manipulation, as well as event handling, CSS animation, and Ajax. Being free, this open-source software uses the permissive MIT License.

Because of jQuery’s great popularity in the first years after its release, it can be found in about 70% of the 10 million most popular websites from 2020 until now. Web analysis indicates it is the most widely deployed JavaScript library by a large margin, having at least 3 to 4 times more usage than any other JavaScript library.

For ecommerce, JavaScript plug-ins are frequently developed using jQuery. You often see many of these plug-ins on the pages of online stores. Examples include a plug-in that changes the color of the same product on a page (e.g., clothes, shoes, wallpaper, even cars) or the magnifying glass that helps to examine individual parts of a product in more detail.

In terms of classification, Backbone.js is a tool in the JavaScript MVC Frameworks category of a tech stack, intended for developing web applications with RESTful JSON interface support. A very light library of Backbone.js needs the Underscore.js library to work. Moreover, it is recommended to connect the jQuery library to support the REST API and DOM.

Currently, Backbone.js is declining in popularity, perhaps due to its age and minimalism. The finest hour for Backbone was around 2013, and that was quite a long time ago. Now the framework is being developed very slowly. For example, version 1.4.0 was released in 2019, and today in 2022, an update to just 1.4.1 is available.

Knockout.js is an open-source framework that works with the MVVM model. It is developed in pure JavaScript without external dependencies. Knockout is lightweight, easy to use, and particularly efficient at data binding—perfect for creating single-page applications (SPAs).

Knockout works very well in traditional business scenarios. Forms, data output, tables—if this is precisely what your application needs to do, then it will suit you. Consider using it in cases where you need an interactive user experience, for example, an admin panel or a simple shopping cart from an online store.

Knockout.js has been forgotten more recently because all new projects use "fashionable" frameworks like Vue or React. Since 2020, only a few people want to work with a framework for which there is little demand.

AngularJS is a life-changing product for front-end developers. Although it is mostly outdated and developers have moved to the forked version called Angular (X), it remains popular as a skills base. Modern Angular 10+ is an advanced modular front-end development framework. To connect Angular to a page, a developer imports the Angular modules into the project.

Angular architecture has been known for its flexibility since its earliest days. This is why the AngularJS version is still relevant. However, many developers currently use Angular 2+ because of the MVC architecture of the framework, which has changed significantly toward a component-based architecture.
Angular 10+ is a complete JS framework that gives modern web programmers everything they need to be productive. This equips developers with a wide range of standard tools at their disposal and minimizes the use of third-party libraries.

Now we move on to the leaders of JavaScript frameworks in terms of popularity. Many developers vote for React, which is not surprising. Users get a combination of important features, including reusable components, application and interface state synchronization, and routing and templating systems. React's ability to create logic in front-end projects is powerful and, at the same time, quite easy to use.

A whole ecosystem was developed around the React library, represented by various auxiliary tools and libraries. Some of the well-known ecosystem components are the React library and the React Router itself, the React-DOM package, React tools for the Chrome browser, the JSX markup language for describing HTML elements in JavaScript code, and the create-react-app command-line tool. React is rich in various helper libraries, including Redux and Axios.

The React library might be your best choice when planning an advanced web project in ecommerce. React is a popular library to use with big web projects. It has proven to be one of the best when it comes to designing ecommerce sites.

The ideas behind Vue took a lot of inspiration from Angular and React, but have been critically rethought. Vue is, in many ways, better than these two front-end development tools. This is demonstrated by the fact that the number of downloads has exceeded 50 million and is growing rapidly.

When working with Vue, a component's logic, layout, and styles are stored in a single file. Also, with the exception of styles, project materials are stored in React. Vue, which is similar to Angular, allows you to mix HTML markup and JavaScript code.

Vue is a great framework that surpasses others in terms of usability. This framework is not as complex as React and Angular, but is well-suited for developing applications of all sizes. For instance, Vue is used by Alibaba, a global ecommerce leader. In 2022, building front ends in Vue is the dominant, mainstream choice for ecommerce software development.

As mentioned, Alibaba, a global leader in ecommerce development, uses this framework and projects that it will be used by far more people within its company moving forward as well. The future seems bright considering Vue’s success at becoming an industry standard among developers everywhere.

In general, it is up to developers to decide which framework is suitable for solving a specific front-end problem in an ecommerce project. In real life, developers usually don't have much time to retrain a brand new tool, so they tend to stick to a framework they know well.

Considering the lack of time for learning new tools, developers could miss out on the potential benefits of new framework technologies. The team leads and CIO’s task is to see the potential in new tools because simply using a framework familiar to the team's developers may not be the fastest or most functional compared to something else. 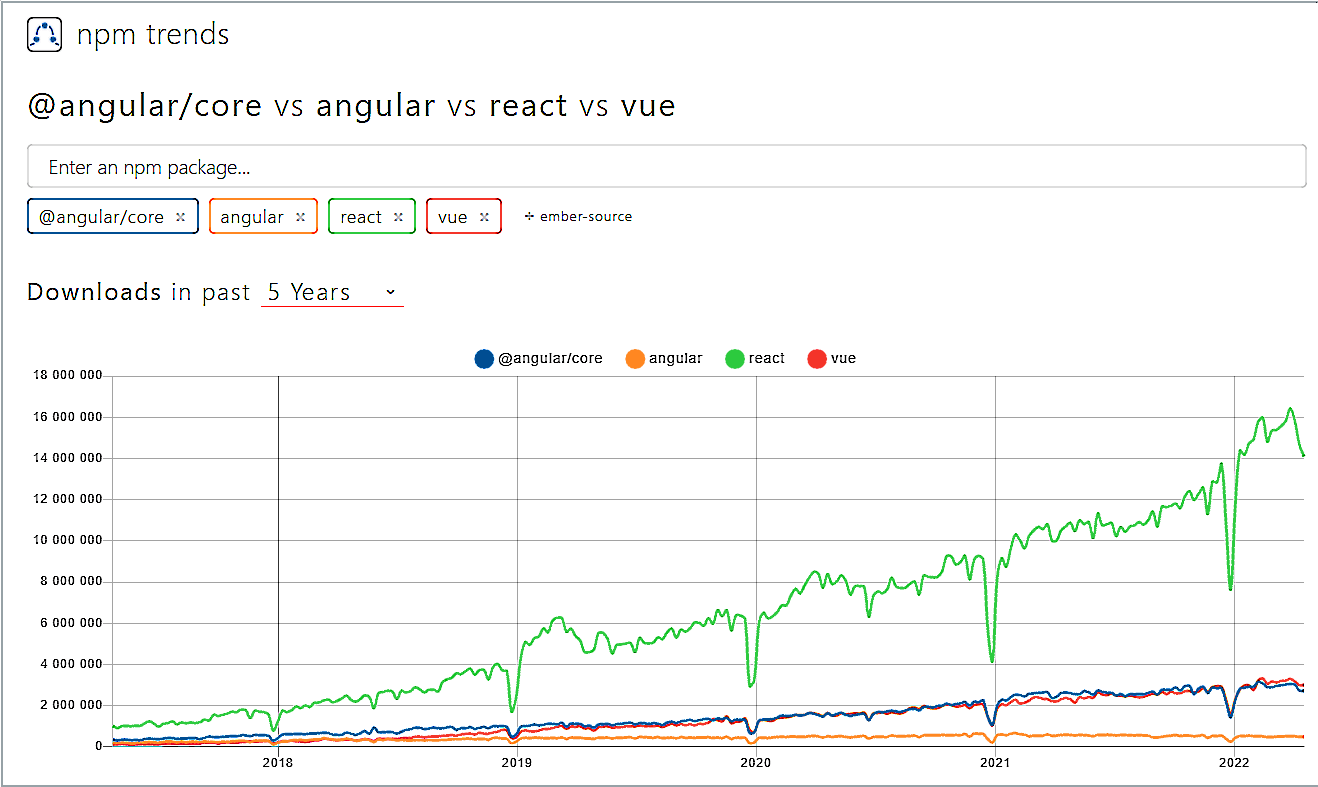 These graphs from the npm trends website show that React has been significantly staying ahead of Angular and Vue since 2018. You can see yearly dips in charts that are related to the Christmas holidays. Since March 2022, there has been a downtrend in the number of downloads, but only the future will tell if this is a reflection of waning popularity in React.

However, the number of current downloads does not close out the conversation about the tool’s prospects or prevalence in the future. Visit this page to update the framework's popularity comparison at the time you read this article.

And for both junior and middle developers, it is better to actively develop their skills by limiting the options to the top three JavaScript frameworks: Angular, React, and Vue. These are front-end frameworks and libraries worth watching in the years ahead for those in the field of web development in ecommerce. 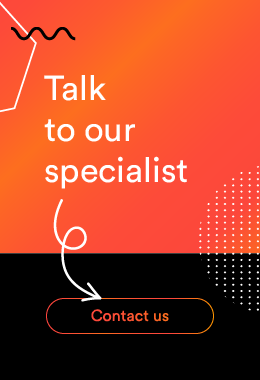 You might also like...
All about Customer Portals for B2B Pharma Sales
Your Short & Simple Migration Manual: From Oracle Commerce to Virto Commerce