Feature Adoption and Usage: How to Make Customers Use New Features

Feature adoption is the cornerstone of a much larger, more incorporating indicator, such as product adoption, and an essential gauge for every other performance metric.

So, how can you tell if features you add contribute to your product’s usefulness and, consequently, to your overall business goals?

In order to answer these questions, you’ll need to look at feature usage and adoption more closely and from different angles.

In this article, we’ll walk you through key feature usage indicators and share tips on how to improve both feature usage and adoption.

What Is Feature Adoption?

Feature adoption means the usage of a product’s specific features. To put it simply, feature adoption refers to your target audience adopting your product’s specific feature by using it. The process is relatively straightforward – if your users find a new feature useful, they start using it; if they use the feature regularly, then they are said to have adopted the feature.

What's the difference between a feature and product adoption?

Focusing solely on product adoption as an indicator is less illuminating, because the adoption rate only gives a high level of insight. To really gauge how well the product is doing, you’ve got to dig deeper into the data and account for both qualitative and quantitative metrics. Analyzing feature usage and adoption on a micro level can help you uncover the layers of insight that could otherwise be hidden when only looking at the 10,000-foot view.

Why are feature and product adoption important?

What Is Feature Usage and How Do I Calculate It?

Feature usage is a type of engagement metric that analyzes user behavior toward a particular feature as opposed to the overall product. It is also an umbrella term that covers a fairly wide range of metrics, such as:

Again, feature usage is important, as it gives you a wider picture of whom, when, where, why, and how users are utilizing a specific feature as well as insight into user behavior, which you can use to improve the customer experience.

How to calculate feature usage

In this section, we'll look at different ways you can calculate feature usage to arrive at clear, actionable insights.

Before we get down to formulas, it's worth mentioning a few common mistakes that can be made when trying to arrive at specific numbers for feature usage.

Secondly, not having a clear objective makes every calculation pointless. Even the most useful metric will lose its meaningfulness without well-defined research goals. Therefore, before deciding what metrics to track, it's imperative to delineate pursued objectives. The following questions can help:

After picking a few of the most important questions to answer, you can determine which metrics are most worthwhile to track. To help you get started, below is a rough workflow to calculate feature usage and its adjacent metrics. 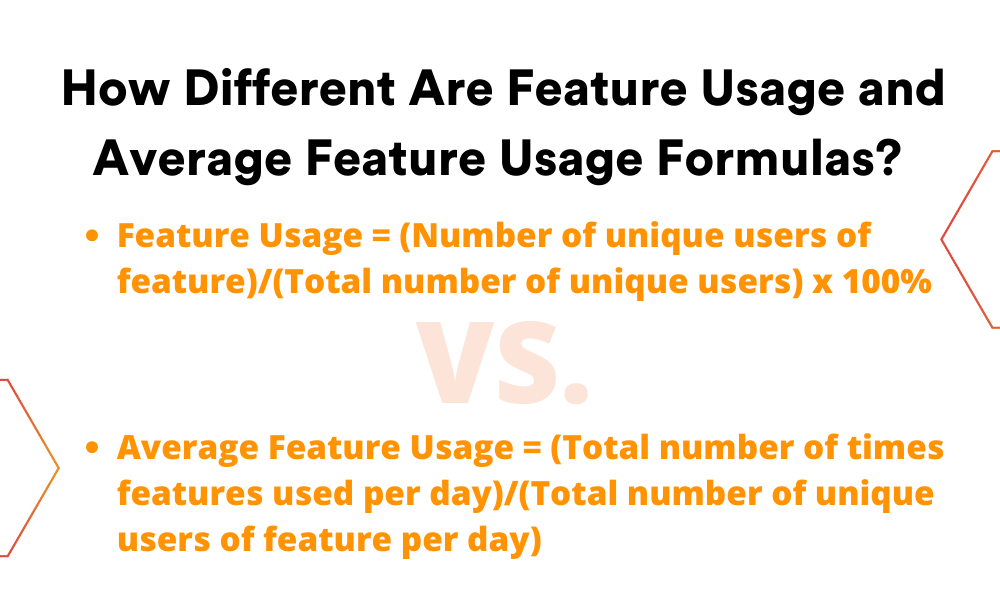 How to interpret feature usage

To get a comprehensive view of feature usage, you'll need to dig a bit deeper and ask yourself further questions, such as:

Qualitative data can provide additional insight into overall customer satisfaction and experience, as well as particular use cases like problems and frustrations with current functionality. To arrive at qualitative metrics, you need to analyze answers on customer surveys, focus interviews, reviews, and comments.

Now, that you've gathered enough insights from both qualitative and quantitative data, you can turn them into effective actions. Depending on the results of your research, you may prefer to incentivize feature usage or fine-tune the current user experience. Below are a few suggestions on improving feature usage among your customers.

As the saying goes, "Two things remain irretrievable: time and a first impression."

When the success of your feature launch is at stake, it's important to demonstrate its usefulness and value to customers as soon as possible.

There are several ways you can create a favorable first impression of a newly introduced feature:
Send a heart-warming welcome message or a notification with an in-app tutorial.
Create an infographic or write a concise how-to guide on using the feature.
Put a banner on the site's home page to help users find a new feature and test it.

Whatever form of introduction you choose, make sure the customer's first interaction with the feature sets a positive tone for future experiences.

You may take another route and segment your customers to offer different onboarding experiences. Offering a single onboarding experience might not be an ideal scenario for B2B, as irrelevant functionality can distract clients from fulfilling their job responsibilities. Segmenting users according to their experience level, job function, title, responsibilities, or options they select during the sign-up process allows you to deliver more personalized experiences that reflect a user's needs more accurately. For example, some customers might not want or need the new feature, while others might find it useful and even critical for their jobs.

Each of the changes you make to your product has the potential to impact product adoption. To maximize the positive impact, you need to treat an introduction of each new feature as a mini product launch. That implies several things.

For starters, onboarding is absolutely necessary, even if the feature is relatively simple, because even experienced users need some time to adjust to new features. Visual modules and in-app walk-throughs can help spread feature awareness and minimize the effort to get started. “No thanks” opt-outs can help users voluntarily dismiss the tutorial without getting distracted and come back to it later when they are ready to start using the feature.

Secondly, adding a celebratory tone to the feature launch can generate excitement and make everyone eager to check out the new feature and see how they can benefit from it.

Support feature usage and adoption with emails and notifications

Like any habit, feature adoption needs reinforcement through repetition. If you want customers to use the feature in a consistent and automatic way, you need to make sure they are repeatedly reminded of it in an easy, effortless, and unassuming manner.

To ensure your pursuit of a habitual user experience is successful, send emails or in-app notifications with upbeat announcements and links to tutorials and walk-throughs.

Use behavioral triggers in response to certain actions within an application or website to nudge customers to check out the new feature and start using it.

Make sure customers who begin using the feature receive timely and relevant guidance at every step of the setup process.

Use marketing tools to boost feature usage and adoption

As mentioned, triggering a feature onboarding en masse is not always the best strategy. Some of your users may not need the feature or will find it intrusive. Use marketing tools for effective user segmentation and targeting so you direct your feature campaigns to only a few select groups of customers.

For example, if you’ve recently added a module for integration with a specific third party, chances are there might be only a few customer accounts interested in integration between offered services. By using a data analysis tool or a customer survey, you can determine which customers have active subscriptions with the indicated third party. Using the research data, you may want to develop a specific promotional pop-up module that will only target this particular user group and inform them of available integrations.

Gathering feedback from users is an extremely important process in agile management that enables both developers and marketers to continuously improve a product. That's why it's essential to keep "talking" to your users, whether through emails, focus groups, or in-person, and gather information regarding the use of the feature. Your customers might find your feature unnecessary, cumbersome, or too complicated to use, or, on the contrary, might have just a few suggestions that will only require small fixes to perfect the feature.

If you have thousands of users, gathering this important feedback data might not be a straightforward process, so you'll need to use marketing tools and product analytics to get to the bottom of feature usage, as well as establish and track KPIs that measure the feature's success.

Again, while quantitative data can point you to the problem, it cannot necessarily unearth deeper problems or tell you how to fix them, so using qualitative data is necessary. Live chat sessions, customer reviews and surveys, help desk tickets, and customer service phone calls can help you form adequate conclusions about the feature, its usage, and adoption.

Feature adoption is the foundation of a larger, more important process, such as product adoption. It’s important to revisit and reinvigorate feature usage on a continual basis.

You might also like...
How to Use Elastic App Search in Virto Commerce
All about Customer Portals for B2B Pharma Sales