The Differences of ASP.NET Core and .NET eCommerce Platform

Jun 2, 2022 • 15 min read
Useful links:
When choosing an ecommerce platform for your business, it's important to research the technology stack on which the platform is built. In most cases, the choice will be between the Microsoft .NET stack and various versions of PHP or Java/JavaScript.
Business owners need to know the differences in programming stacks and technologies in order to hire the right number of developers for their ecommerce IT team. Every retail or manufacturing business has its unique features and business processes, so they’ll need a team to customize and maintain the online store solution.

What Is a Framework for Developers?

When it comes to software development, you’ll always hear the word “framework” being referenced. In today’s fast-paced environment, technology is evolving rapidly: new websites, applications, and software of all kinds are created every minute. Developers use frameworks to speed up the work on these projects. 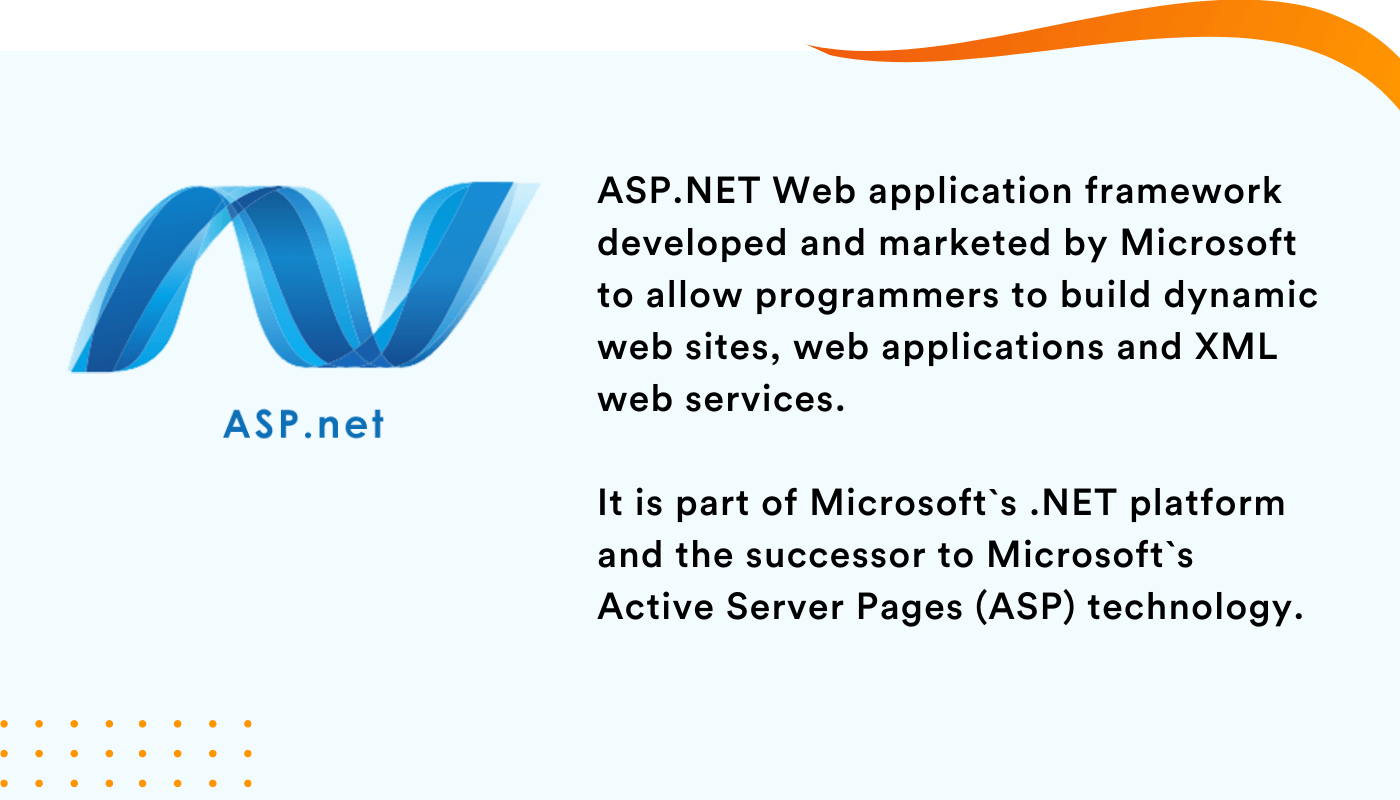 A framework is a set of software products that simplifies the creation and support of technically complex or loaded projects. These foundational elements contain only the most basic program modules, so all specific, customized components are implemented by programmers, according to their specifications. This highly accelerates the development speed.

If frameworks did not exist, each site would take a long time for it to be created. Having this foundational structure allows you to connect to different types of databases without immersing yourself in their specifics. A framework offers ready-made solutions for working with the file system, along with tools for optimization and acceleration of the application.

Analyzing all the advantages, the framework does most of the developer’s work. For example, developers do not need to think about how to write data to the file, they just call up a method that solves this task.

Considering the general benefits for developers outlined above and a number of interesting features that will be discussed later in this article, we at Virto DevLabs have chosen .NET 6 and ASP.NET Core as the atoms of Virto Atomic Architecture™. 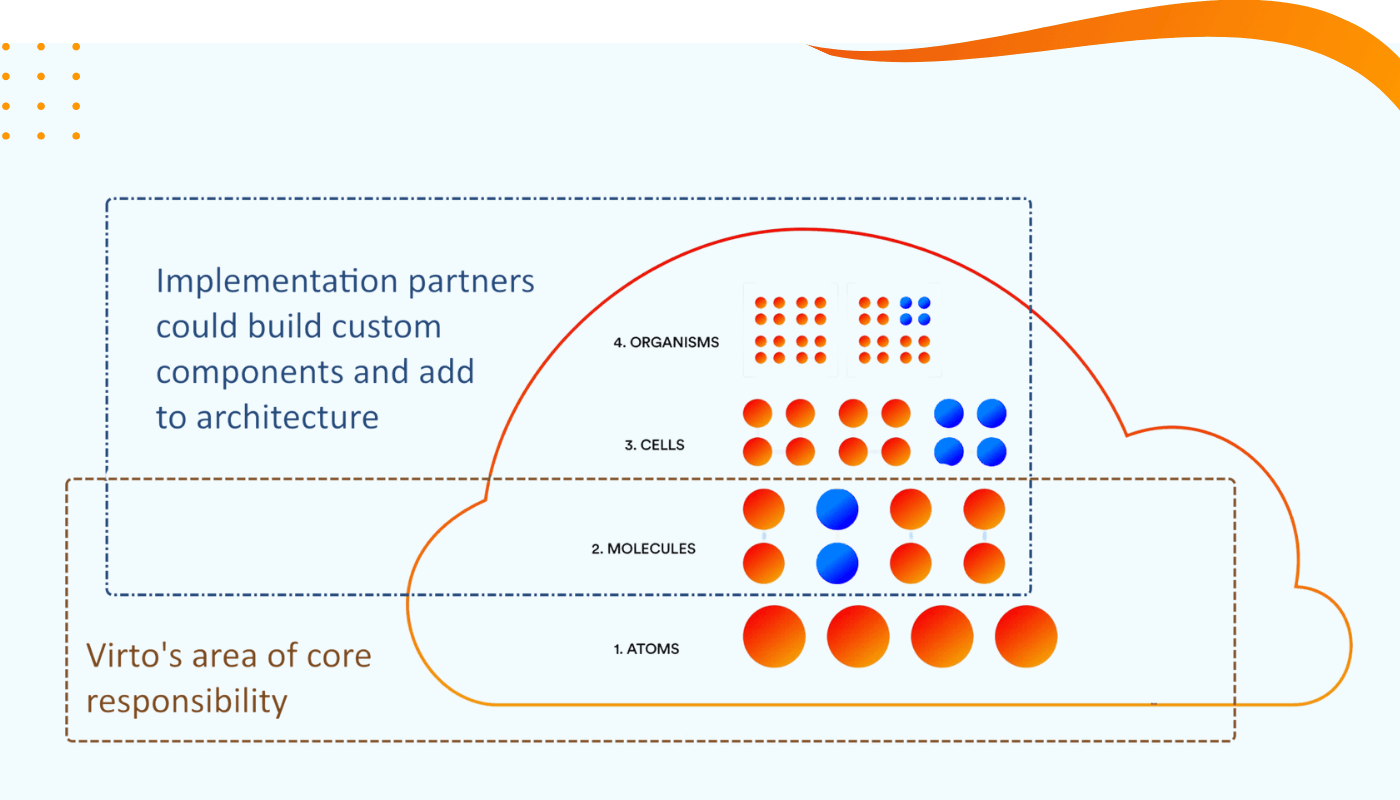 Virto Atomic Architecture™ is the framework on which our ecommerce platform is built. If you want to learn more about this architecture, we invite you to read the posts in our blog:

For people who want more technical details, I recommend my post in the Virto community, which is full of links to technical docs from Virto and Microsoft:

through the efficacy of your developers.

Instead of wasting time on architectural issues

they can stay focused on business tasks.

First, atoms include patterns as architectural approaches, such as modularity or dependency injection. Second, the atoms layer also accommodates third-party frameworks and components, with .NET being the bedrock of such frameworks—all modules are created in this base. And finally, there are software components that we ourselves built.

Let’s assume you need to build a website with a database at its back end, and are looking for a good tool to use. There is ASP.NET Core and there are competitors—you can build web applications using Java, Spring, PHP, Laravel, Python or Python with Flask, JavaScript with NodeJS, and so on.

What is the difference and why might you prefer to use ASP.NET Core? The answer is simple: ASP.NET Core gives you a tool to create enterprise-level applications. More importantly, this framework is not only to build apps for the big brands. With Microsoft C# and ASP.NET Core, you can build web applications for your startup too. 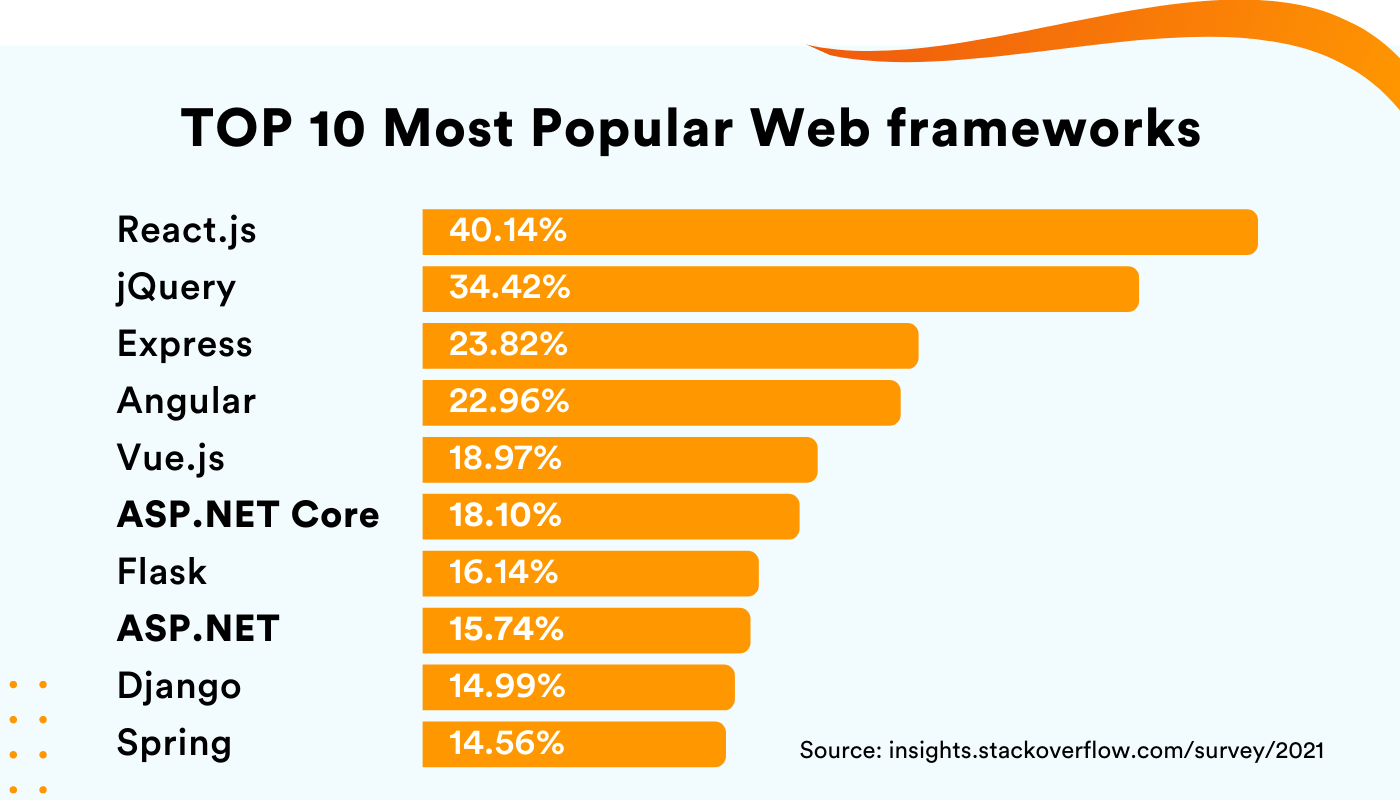 within the Top 10 most loved web frameworks in the

Forward-thinking businesses should understand that, for projects in ecommerce, continuity of development tools is important. Hot trends for development tools change quickly. Your ecommerce web site, on the other hand, should be built to live for at least ten years, and should be maintained and updated all that time—meaning, you must be sure that you will find both developers and software in ten years. And here is where Microsoft significantly outperforms the competition: ASP.NET has been around since 2001 and is continually evolving.

What is the difference between ASP.NET Core and ASP.NET?

These are versions of the same framework.

ASP.NET is an outdated version, requiring the Microsoft IIS server

as a free and open-source cross-platform

web framework and successor to ASP.NET.

Use the following scheme when comparing ASP.NET Core and ASP.NET:

At the time of this writing, the current version was .NET 6,

This framework will be supported by Microsoft till mid-2024.

Understanding All Parts of The ASP.NET Core Term

ASP.NET Core: Let's decipher each part of that term to clarify your understanding of Microsoft technology.

As mentioned, ASP.NET Core is Microsoft's solution to developing web software and is a part of .NET. In turn, .NET is a unified platform, enabling you to build almost anything in software—desktop applications, web applications, hosting on the cloud, creating apps in mobile, gaming, Internet of things (IoT), and artificial intelligence (AI).

Microsoft is a very powerful player in software development

and .NET is its open-source, cross-platform

ASP.NET Core can be combined with popular front-end JavaScript programming languages like React, Angular, and Vue or a mobile application.

.NET at a Glance

Created by Microsoft, .NET is an open-source developer platform useful for building a plethora of applications. One important consideration is that .NET is free to use for any developer.

If you want to learn about .NET in greater detail, we recommend this comprehensive article, Announcing .NET 6 — The Fastest .NET Yet. It includes a huge number of links to Microsoft's clarifying documents. However, this article was written mainly for developers, so frankly, business people won't understand much there.

Let me comment on this diagram from Microsoft, outlining what components are included in .NET using Virto Commerce developers as an example.

.NET Common Base Libraries/APIs have been chosen as our main platform framework on which our ecommerce platform is written. Now let's go left to right and talk about these .NET components.

Would you like to learn more about ML? Read our post AI in eCommerce: Challenges & Solutions. How to Use Machine Learning in eCommerce.

Feel free to use Virto Commerce’s repository in GitHub.

The last column is the .NET integrated development environment (IDE). This means software applications that provide comprehensive facilities to computer programmers for software development. This consists of a program that provides complete resources and support in the field of software development. At the moment, an IDE is normally composed of source code editor and build-automation tools, as well as a debugger and intelligent code completion.

After reading this post, you now have a good understanding of the inner workings of .NET—at least, better than most people who are not developers. To consolidate the success of your new knowledge, take a look at the FAQs section.

Cross-Platform Development in .NET with Xamarin

Xamarin is a tool for creating applications in the .NET family of languages (C#, F#, Visual Basic), which allows you to create a single code that runs in Android, iOS, and Windows.

Imagine yourself as a developer given the following cross-platform development task:

Creating several applications is not the right decision in this case. It would be more productive to develop a single code base for two platforms with the ability to add individual functionality where needed. Consider the technology stack: C# to be chosen as the programming language, and Xamarin.Forms as a tool for cross-platform development.

A frequent question is whether it is necessary to choose one platform as a priority and another as a catch-up. During development, it is desirable to avoid refactoring of all visual components. Therefore, the development of a cross-platform project should be done in parallel on all intended platforms.

The powerful AI capability allows you to add Azure Cognitive Search to your ecommerce solution and use Azure Machine Learning Studio to build predictive models for sales, margins, discounts, and other ecommerce metrics.

All these tools give developers advanced environments, cloud infrastructures, APIs, and tools for building a rich user experience over diverse content in web, mobile, and enterprise ecommerce applications.

What is the difference between .NET, .NET Core, and .NET Framework?

These are different versions of the same development platform. The .NET Framework is a very old platform that runs only on Windows. The .NET Core is a newer platform that can run on both Windows and Linux. Starting with version 5, .NET Core has been renamed to just .NET with a version number. And only the ASP.NET Core framework for creating web applications has the “Core” prefix. Admittedly, Microsoft has a rather complicated history of naming the same product from version to version, so it is not surprising that many people find this confusing.

Why did Microsoft invent ASP?

About 1997, there was a big change from desktop-centric computing to web-centric computing with Java. So, Microsoft invented active server pages for web-based applications. At that time, only Microsoft Internet Explorer could display active content of web pages. In 2002, Microsoft provided ASP.NET framework to compete with Sun’s Java Platform. ASP.NET is very similar to Java as a language that could be written on one platform and executed on any platform. This is the evolution of ASP.NET replacing ASP technology.

Is .NET a programming language?

In fact, .NET is not a language, but a development solution. The .NET consists of a run-time engine and libraries for executing programs in a compliant language. For example, C# is one language used in the platform.

What are the .NET programming languages?

You can write .NET apps in C#, F#, or Visual Basic, which are all ready-to-use in Microsoft Development Studio. These are three so-called .NET languages, but you can also use another programming language in .NET if you have a favorite.

How many languages are supported in .NET?

C# is one language and by far the most popular language among .NET developers. Generally speaking. .NET is language-neutral framework that supports more than 20 platforms, including C#, C++, VB, F#, Java/J++, Ruby, Python, etc.

What is a dynamic ASP.NET page?

An ASP.NET page is a web page containing a mix of HTML markup and dynamic ASP markup called Razor. An ASP.NET runs on the server, updating the dynamic ASP elements to display a final HTML page. Every time you click on an item on a web page, you get a custom version just for you. It is hooking up to a database and showing information in a dynamic mode so that this is an end-to-end solution.

What is ASP.NET Web Forms?
Web Forms is an outdated version of ASP.NET (2002). But for the time being, it is a giant layer of abstraction designed to provide a classic event-driven graphical user interface through a web environment. The idea was to make web development look like development using Windows Forms for desktop applications. Developers no longer had to deal with sequences of independent HTTP requests and responses. They could think in terms of a user interface that supported the state. Meanwhile, Microsoft had the opportunity to migrate the army of Windows desktop application developers into the new world of web applications. You might also like...
All About E-Procurment Software Solutions
Your Complete Guide to the Best ASP.NET eCommerce Platforms in 2022