We use Cookies
To help personalise content, and make your experience better on our website. By clicking on the Accept & Close button or continuing to browse this site, you agree to this. For more information please read ourPrivacy Policy.
Accept & Close
Try virto now
Home
Virto Commerce blog
What Is Virto Atomic Architecture™?

What Is Virto Atomic Architecture™?

Virto Atomic Architecture™ is atoms, molecules, cells, and organisms working together to create an effective ecommerce solution architecture. Using atomic design, the architecture of an ecommerce platform can be described by a set of composable elements.

In Virto Atomic Architecture™, we present the following five layers:

The core concept behind Virto Atomic Architecture™ means to think about an ecommerce application structure as a universe where the smallest components (atoms) are included inside bigger elements (cells), which are included in even bigger molecules, and, the last enlargement step, they are in turn included in even bigger organisms. The organisms represent ready-to-run ecommerce applications to deploy in the cloud (Microsoft Azure, AWS, or other) as their living environment. 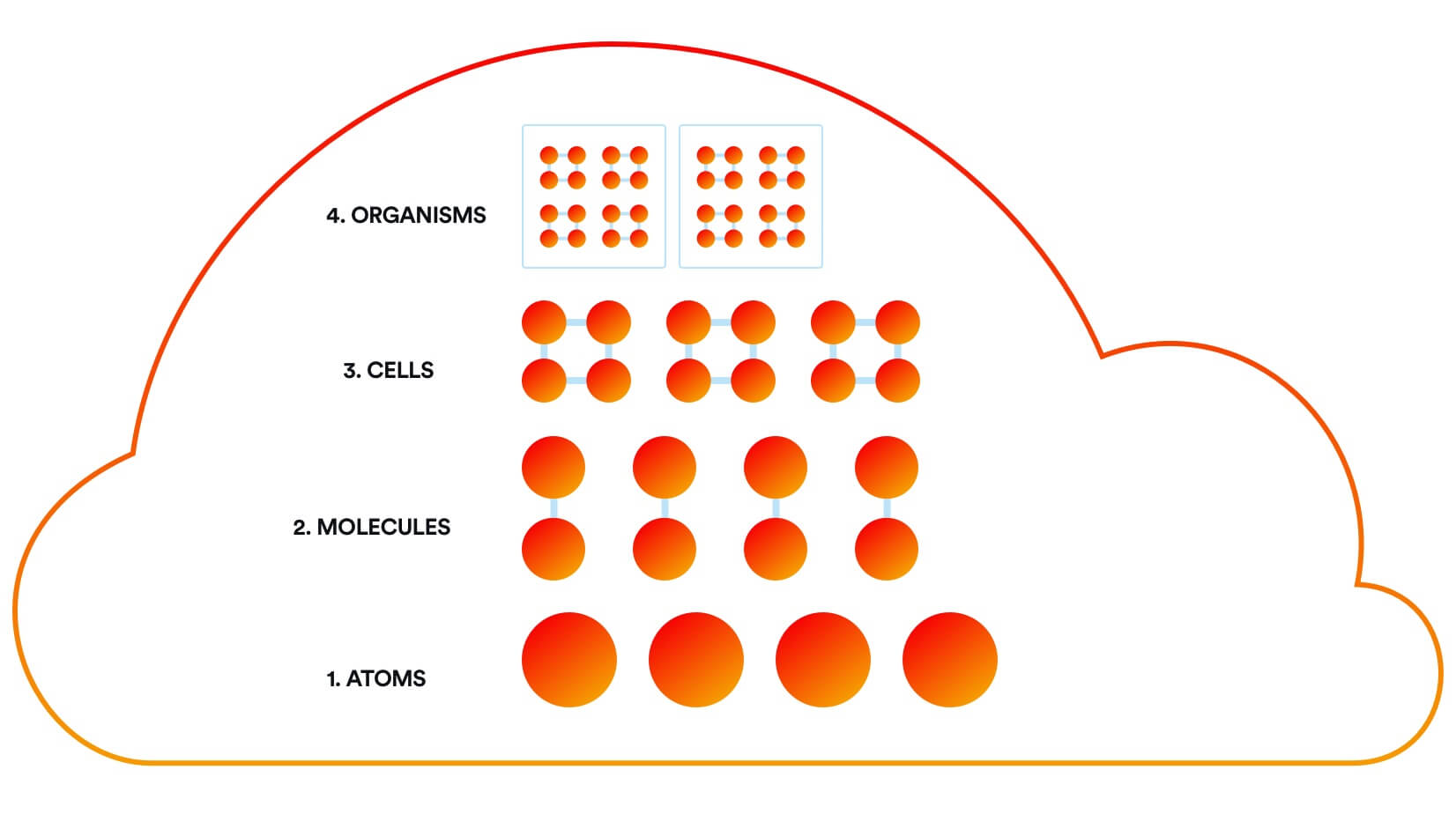 Through the comparison to atoms, molecules, cells, and organisms, we can think of the solution architecture as a composition of self-containing modules put together.

Explaining Virto Atomic Architecture™, we focus on key principles that allow you to get a composable, flexible, manageable, customized, and easily updated e-commerce architecture that is fully adaptable to market challenges.

Our ecommerce platform development team can create their atoms, molecules, cells, and, finally, organisms. Accordingly, all these elements are ecommerce applications with an ecosystem living as an open sharing-economy community in which the parties share their experience and can reuse the elements like cells and molecules.

It begins at the smallest component level (atoms) and combines those to create larger components (molecules), which themselves get combined into still larger components (cells) that make up the applications (organisms). The result is an easily composable system with a large number of components that developers can select and assemble in various combinations to meet the specific business requirements of the online commerce.

Elements of each layer can be updated, improved, and evolved. The change in the functionality of the components helps to organically adapt them to new market conditions and business requirements. Just as in the world of living things, the most viable and efficient components are chosen by natural selection and receive priority in the ecosystem of applications.

Resource management and the ability to increase and decrease the load on the commerce platform allows you to control the cost and scale the business as it grows.

The components are scalable, that is, expandable. The platform is able to use the required number of components to run on demand. For example, the ordering system could be expanded independently of the catalog system, and both kinds of them could scale independently.

A successful implementation of the Virto Commerce platform is always the result of efforts from Virto, our partners, and clients’ dedicated teams. This means shared responsibility between teams while maintaining the hassle-free manageability of the development, customization, and platform support processes. Shared responsibility also means a high degree of trust with simple and straightforward rules for interaction between teams.

The simple, understandable, logical, and traceable Virto Atomic Architecture™ brings many benefits that allow companies to reduce the cost of platform ownership throughout its lifecycle.

– Ability to mix and match components

It's clear what parts of the solution can be reused, and how they can be mixed and matched with other atoms, molecules, cells, and even organisms.

If a solution is created according to Virto Atomic Architecture™ principles, this means that all previously created atoms, molecules, and cells can serve as an architecture reference document. Also, you can control dependencies between the components.

It’s easy to check which components are being used for different parts of the solution. This reduces writing duplicating code and allows precise control of the dependencies.

With Virto Atomic Architecture™ principles it is easier to explain the codebase to the new members of the development team. This is true not only during the time of creation, but in the future when a solution is being looked back on for reference or small tweaks.

As only one atom, molecule or organism is being changed at any one time, it is easy to ensure that any updates to a component are carried across to all other instances across the site. Similarly, unwanted components can easily be removed.

– Traceable instances of the components

The ability to track the use of certain components in the ecommerce platform allows them to be clearly managed. If anything needs to get updated or deleted, you know exactly where to go and what to change.

Finally, the last benefit is the no-vendor lock, because you can replace any piece of functionality with either an internal or a custom one. We don’t practice locking, which happens often in the cloud environment.

As is often the case with abstract models, they step over their boundaries and original subject areas.

Through the comparison to atoms, molecules, cells, and organisms, we can think of the solution architecture as a composition of self-containing modules put together.

Enough abstractions! Let’s delve into the structure of our real ecommerce platform, built of five atomic design layers. We will continue this post further, talking about each layer of Virto Commerce architecture. 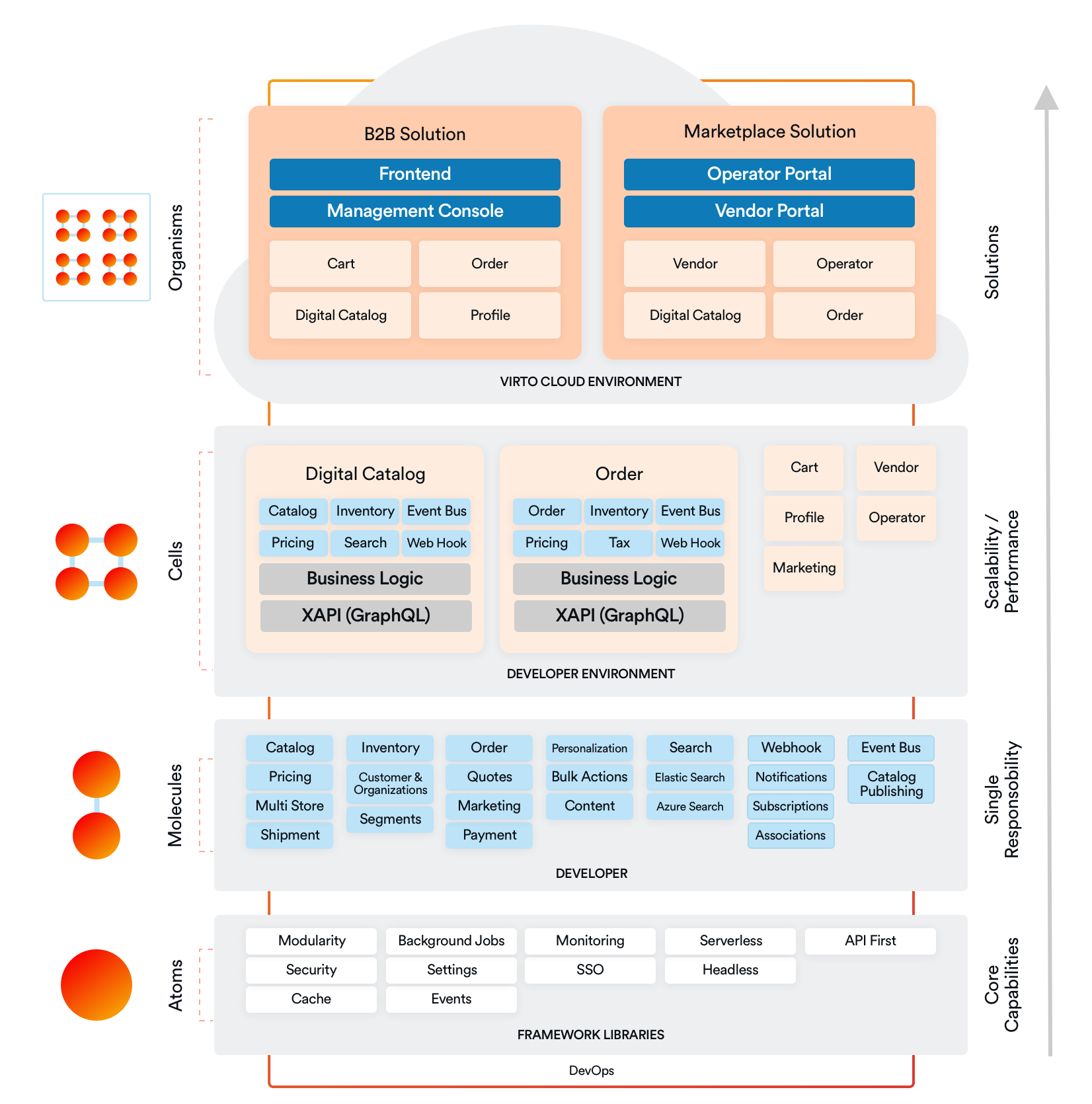 Virto continuously works on the identification and improvements of the set of core atoms. But if it’s required, you can create a new one or customize existing ones, for example use a new type of database.

Being assembled together to get various functionality, atoms are composed of “molecules”. The second layer of Virto Atomic Architecture™ is a molecule level.

An example of a molecule can be a catalog, prices, inventory, search, event bus, webhooks, and others.

A molecule is a group of atoms and business functionalities that work together according to a single responsibility principle. Usually, the molecule has an API for communications with the other molecules and a database as persistent storage.

Within the ecommerce platform, any molecule can be represented as a software module.

At the molecule level, you can design your own molecules, for example, create a dynamic price, loyalty, etc.

When molecules are placed in a functional interaction context such as a digital catalog, they become "cells". The term “cells” includes atoms and molecules required to obtain the desired functionality.

Cells are a set of molecules that are combined by functionality context into one package to implement a complete scenario. Cells are designed as scalable units; we can create new instances of cells, so each cell is a high-available, high-performance, and isolated container.

An implementation partner working with Virto Atomic Architecture™ in the cells layer is focusing on aggregation and orchestration to implement business scenarios with different cells.

Examples of ecommerce cells can be a digital catalog, order, shopping cart, user profile, marketing, and so on.

Digital Catalog – For most ecommerce solutions, a digital catalog should combine the catalog, price, inventory, search, and other cells as one entity and present it as an API for the client application.

Order – This is a full-featured order component with inventory, taxes, payment processing, etc. This cell is ready for integration with ERP via API and integration middleware. Usually, it contains either a webhook or event bus for proactive notifications between packages.

Virto creates predefined software packages by combining and assembling cells together. These packages can be extended or reassembled by the implementation partner or client to create customer-specific packages containing modules either from Virto, a partner, or custom ones.

The Virto team provides different tools to partners and clients to help with the creation of packages.

How does custom package building work? Basically, you just create the configuration file and specify which modules you want to include in those packages. Then the tool will prepackage and prepare them for you to develop locally, so you can debug, troubleshoot, compile, and so on and also create the package to deploy into the production environment.

The packages can run locally on your own machine, so it's easier to develop them, or they can be deployed into the cloud initially or after the QA check on a local machine is done.

How many cells/packages are possible?

Virto Atomic Architecture™ doesn’t block creating as many packages as you want by a vendor or partner. Consider several different approaches to help you keep the number of components under control:

The fourth upper level in Virto Atomic Architecture™ is the analogy of organisms. This is a level of solutions that combines client applications (web, mobile, chart bots), packages, integrations, and third-party services (ERP, PIM). Usually, an organism is an abstraction of how the business and end user see it.

Examples for organisms can be B2C, B2B websites, marketplace, etc.

All elements in an organism use API for communications and can be deployed, scaled, and maintained independently.

All organisms in Virto Atomic Architecture™ live in the cloud. When you have an organism (aka solution) ready to run, you can deploy it in the cloud environment.

Note: That is, you can test solutions first locally (on premises), and then deploy in the cloud. This is because organisms are completely cloud-ready.

More and more businesses are actually interested in the cloud. At the same time, some of Virto’s largest customers – just because of the nature of their business – wanted to deploy more locally, having an environment and the kind of security they have.

For example, one large customer has a managed service provider that deploys all their software, so they prefer their packages deployed in their own environment. But again, there are some aspects of the marketplace that they consider important enough to deploy in ready-to-use cloud environments.

Get familiar with the meaning of each term mentioned above so the descriptions in Virto Atomic Architecture™ will be clear.

Virto Atomic Architecture™ in ecommerce brings a fast way to innovation, because you can actually create new solutions using and assembling pre-existing modules. For example, we at Virto Commerce do that quite often with a new customer – where we need to showcase it, we just take the modules, integrate them into a Virto package, and then showcase them to achieve a custom look. This shows how the system can work and what it looks like.

The great benefit is the replacement of existing apps. For example, we have a few customers who have more advanced requirements for pricing, so it can be driven by the ERP, or it can be a very complex B2B scenario that our pricing engine doesn't support. In this instance, they actually write their own pricing module and then replace or extend our one.

The final point to remember is that the organisms (aka solutions) that work for us can be launched on local machines to test them, while they are ready to work and be launched right in the cloud.

Technical Product Owner
Sign up for Virto Commerce news and updates
I confirm that I have read and agree to the Terms and Privacy Policy, which explains how Virto Commerce collects, processes and shares my personal data. 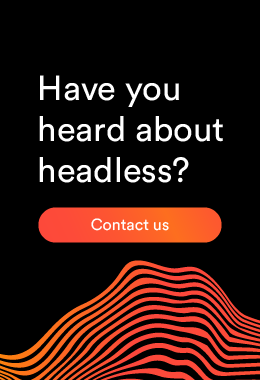 You might also like...
Business
The Law of Dynamics: How the Concept of Change Should Shape Your Approach to eCommerce
Business
Top European Marketplaces: Best B2B Marketplaces in Europe