Since 1995, when Amazon, eBay and CompuServe started their first online businesses, ecommerce software went a long way of improvement, turning from fairly simple shopping cart applications into complex and sophisticated platforms. Let's walk through the evolution of the ecommerce platform to understand the development trends such are microservices and headless ecommerce and what the future holds.

What is an ecommerce platform?

From a marketing perspective, the word ‘platform’ looks much more valuable than an online trading add-on module, shopping cart plugin or application. So, the term ‘platform’, e.g. b2b ecommerce platform, began to be used for almost any piece of the ecommerce software.

In fact, there are several criteria by which software, developed for the online store, can be referred to as an ecommerce platform. Let's list them:

The growth to a platform from a basic ecommerce software

When you enter the ecommerce platform market, you will discover two important stories on how today's leaders have arrived here since their foundation.

The first way is a natural step-by-step development from relatively simple applications towards the platform, by permanently adding new functions. This way has also been facilitated by the general development of IT technology stacks such as new operating systems, frameworks and virtualization supported by faster servers, storages and networks.

Many of today's leading platform providers started in the mid-2000s as small teams with a modest product to run an online store. Now they are large and successful multinationals. Examples include Shopify, Virto Commerce, BigCommerce, Magento, and many more.

Shopify’s story started in 2004 with the attempt to open an online store for snowboarding equipment based on existing ecommerce products. Dissatisfied with such software’s time market, the founders built their own product, using the open source web application framework Ruby on Rails. After evaluating the potential of online trading software, it became clear they could achieve much more commercial success than just selling ski accessories.

The founders of BigCommerce used idea that there were very few IT people among total number of ecommerce entrepreneurs, so the market needed a product where it was not required to have in-depth IT knowledge or to hire a development team. In other words., these entrepreneurs need an ecommerce product designed for non-technical business owners. At that time the biggest challenge for BigCommerce was to follow the transition Google made from download-to-own software to SaaS. In August 2009, the first version of Interspire Shopping Cart was released as the company’s SaaS offering .

The Magento way was the most winding of these examples. The company was sold and bought several times. From 2011 to 2015 the company was owned by eBay, and its technologies were used in the operation of this both business to customer & business to business marketplace. Magento is currently owned by Adobe and provides two distinct platforms: Magento Open Source (initially released in 2007) and Magento Commerce as an on-premise or a PaaS version.

Virto Commerce, one of the net ecommerce platforms, was founded by Alexander Siniouguine and Eugeny Grigul in 2011 to develop and sell advanced ecommerce solutions to enterprise and mid-sized online stores and marketplaces. By that time, Alexander Siniouguine had extensive experience in creating ecommerce software on the Microsoft technology stack, being a strategist and architect of the eCommerce Framework project (ECF). The first version of the Virto Commerce platform was released in 2012, followed by the 2nd version in 2015 and Virto Commerce 3 in 2020. The advanced set of clean architecture, modern technology stack and cloud-native ecommerce solutions with powerful extensibility capabilities make Virto Commerce very attractive for technical integration and solution integration teams as a perfect choice for various ecommerce projects. The growth to a platform from non-ecommerce industry software

The second common way of ecommerce platform development is branching off from the parent company’s main business, which was engaged in the market niches of database management, CRM or CMS solutions.

Sometimes a new ecommerce platform was created by the experience gained through integrating a main product with third-party ecommerce modules. Usually, however, it originates from mergers and acquisitions of companies that are already specialized in developing vital ecommerce components. For example, Oracle Commerce, Salesforce Commerce Cloud and WooCommerce platforms have gone down this road.

Oracle Commerce is a family of products designed to create and manage large ecommerce sites of various types. The current Oracle Commerce product line emerged due to many business development efforts, including Oracle's 2011 acquisitions of two Cambridge-based companies: Art Technology Group (ATG) and Endeca. ATG has been offered an advanced CMS with a directory management system. The second company, Endeca, was formed in 1999 and specialized in search and navigation technologies.

Salesforce is known as the CRM system developer, provided to customers exclusively through the SaaS model. In 2016, Demandware — a software technology company that provided a cloud-based unified ecommerce platform with mobile, AI personalization, order management capabilities for B2C/B2B retailers – acquired Salesforce. After the rebranding, these products became known as Salesforce Commerce Cloud platform.

WooCommerce was initially developed in 2011 as a free plugin for small to large-sized online merchants using WordPress. Since then, WooCommerce attracts significant popularity because of the free base product, enriched with hundreds of extensions and more than 1,000 additional functionality plugins. Many paid WordPress themes now offer WooCommerce capabilities, with up to 4 million websites using WooCommerce in 2020. Because of official partnership program and many available WooCommerce extensions including WooCommerce Bookings and WooCommerce Memberships, the product is now considered a full-featured ecommerce platform.

Cloud ecommerce or on-premise — think about expenses and elastic load

Marketing activities such as discount selling, flash sales, and promotion events have the reputation as rocket boosters for ecommerce. But there is another side of the coin — any goods sold below the standard price lowers the retailer's margins and forces him to cut his technology budgets as much as possible. Therefore, the CTO of a retailer must find a way to save money. And the cloud model of IT infrastructure supports to do this in most cases.

Savings can be achieved by shifting from a fixed capital expense model to a variable-cost and possibly lower operating expense model. This is a primary consideration for cloud adoption. The second PRO is that the cloud provider has a reserve of servers and storage capacity that can be used during peak times, such as Christmas sales. This is called an elastic load (also known as “dynamic scaling”) that adapts to the resource requirements of the ecommerce platform at any given time.

The deal switch to the cloud seems easy , but some unaccounted costs may arise during the transition from an on-premise to the cloud model. Retailers, except for very small businesses, need to integrate many separate systems to run their business. Each technology component most often depends on another company, such as a supplier, shipping, transportation service, outsourced financial services, etc.

Many cloud-native applications support autoscaling. Autoscaling reduces the need for an operator to monitor the performance continually.

If you apply it, you can optimize costs. For example, when we migrated our on-premise solution to the cloud and configure proactive monitoring, we decrease the cost several times. Focus on driving sales, not managing the IT infrastructure.

If you have non-cloud-native elements of your ecosystem, check and review them with Vertical and Horizontal scaling. And it’s a good point for growing.

Too big to change [the platform]: eCommerce replatforming

Any large retailer's platform contains at least dozens, but more often even hundreds of modules responsible for integrating with third-party bodies. There are probably some legacy apps here as well.

Migrating ecommerce applications from one platform to another while maintaining the existing integration with local legacy systems can be challenging and costly, as legacy systems typically provide limited integration capabilities. This often includes cloud to on-premise integrations across the Internet.

When the part of the data is taken from local servers, the ecommerce architecture becomes a hybrid cloud for the integration. The challenge includes costs for the development team working on re-integration tasks, online business outages and all the security and performance issues it can bring. On the other hand, for a limited budget, it allows a large part of the legacy integration to remain intact until “better times”.

Be sure to learn about the 5 pitfalls leading to replatform

Download our whitepaper prepared by the industry leading experts!

Oleg Zhuk, Solution Architect at Virto Commerce says: “When I visit our client or partner, I better start discussing the architecture reference (see the diagram below). This task’s primary idea is to see all ecosystems, split real-time and non-real-time elements, define the master data source and clarify the dataflow. And finally, reuse as much as possible and provide step by step digital transformation”. 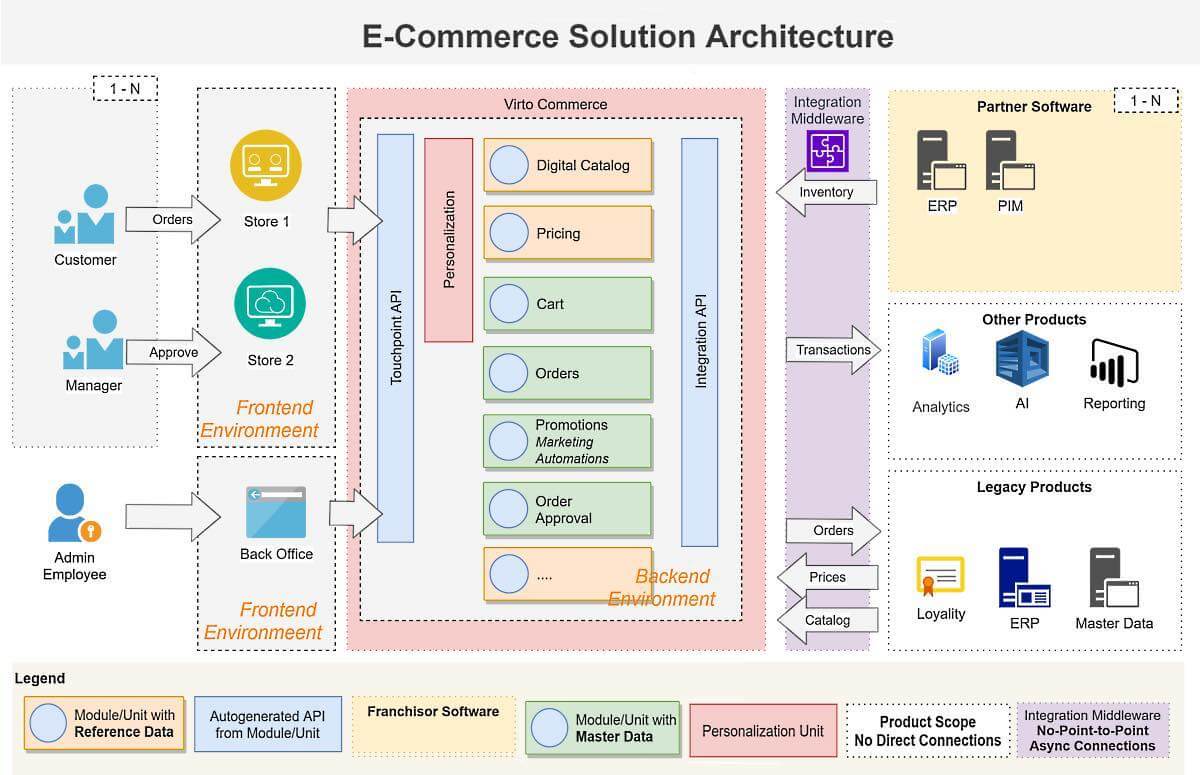 Microservice for ecommerce to simplify integrations

After reaching a certain complexity of relationships and many integrations within the ecommerce platform, it becomes challenging to manage even the smallest changes (within the same platform). How to solve this challenge? The answer is microservices for ecommerce.

For some time now, the ecommerce microservices architecture is used to solve this problem. By breaking down large modules into a set of microservices, functions can be built from several smaller parts (search, AI hints, discounts, product, cart, order, payment, etc.) that work together, but can be developed separately. There, when defining technology-independent relationships, you can use different programming languages, including skills of outsourcing teams.

Developers are no longer limited to legacy technologies or just programming languages owned by the core team. Microservices can be freely developed by different teams. A widely accepted practice in the industry is that the microservice module should be small enough to be overwritten within one sprint or two weeks.

For retailers, it is essential to know that integration is no longer a problem. All cloud-native services and microservices have API. The cloud-native integration middleware, like Azure Logic Apps, Dell Boomi, MuleSoft, etc. can connect different services into one ecosystem.

They have a hundred ready to use connectors and declarative infrastructure to describe dataflow and data-transformation. This approach also ensures the development can be simplified and split. One team can build one service, another one can build the second service and third team can integrate them. In other words, an integration can be developed independently without touching ready-to-use solutions. At Virto Commerce, we have cases where we have built a complex integration between an ecommerce solution and an ERP just in a few hours.

API as a superglue to build a perfect ecommerce platform

What is next? Unification and standardization for interconnection interfaces between various modules and applications involved in an ecommerce business. For example, the standardization of screw threads has evolved since the early 19th century to facilitate compatibility between different manufacturers and users. This could boost the further development of ecommerce platforms tremendously, freeing developers and budgets from the routine tasks of “interface docking”.

One of the obvious ways to further develop platforms is to integrate touchpoints with each other with a new level of targeting and personalization based on Big Data. This will help sales and reduce the number of abandoned carts, when each contact with the platform across various touchpoints is remembered and analyzed according to the user experience.

Technical Product Owner
You might also like...
All About E-Procurment Software Solutions
Your Complete Guide to the Best ASP.NET eCommerce Platforms in 2022