We use cookies to provide best web experience for our users. By continuing to browse this site, you agree to this use. Read more from our Privacy Policy Accept
Try virto now

A lot of different e-commerce store owners, from small to huge, are trying to work with free open source e-commerce platforms. It’s true that selling things online isn’t cheap. On the other hand, using free open source software means at least less monthly fees that you have to pay.

Open source solutions are the frequent visitors of all kinds of platform “top 10” lists. The most popular one out there - WooCommerce - is also open source at its core.

There are two main cases of work with open source e-commerce platforms. One way to approach it is to be skilled enough (and have enough time) to work with CSS, HTML, Ruby on Rails or any other programming language while visiting code forums in your free time. The other way to work with open source platforms is if you have no time, but do have sufficient funds - you can hire someone to do the job for you, using every nook and cranny in platform’s code to make your e-commerce site exactly how you want it to be.

Boasting their 37% part in total online store count, WooCommerce’s download statistics is impressive - over 14 million downloads in total. This makes WooCommerce the most popular e-commerce solution available - and yes, it’s open source. It was created by WooThemes, which is equally popular, and the very purpose of WooCommerce from the beginning was to help its users with turning their WordPress site into an e-commerce store.

But popularity comes with a price - literally. Most of the more complex features of WooCommerce are paid features and not included in the “free” part. Same goes for store support. Despite all of this, WooCommerce is still a great solution that’s easily scalable with little to no problems and that’s why it’s often chosen as the target platform by large businesses - even though it’s just as good for small or medium-sized companies. 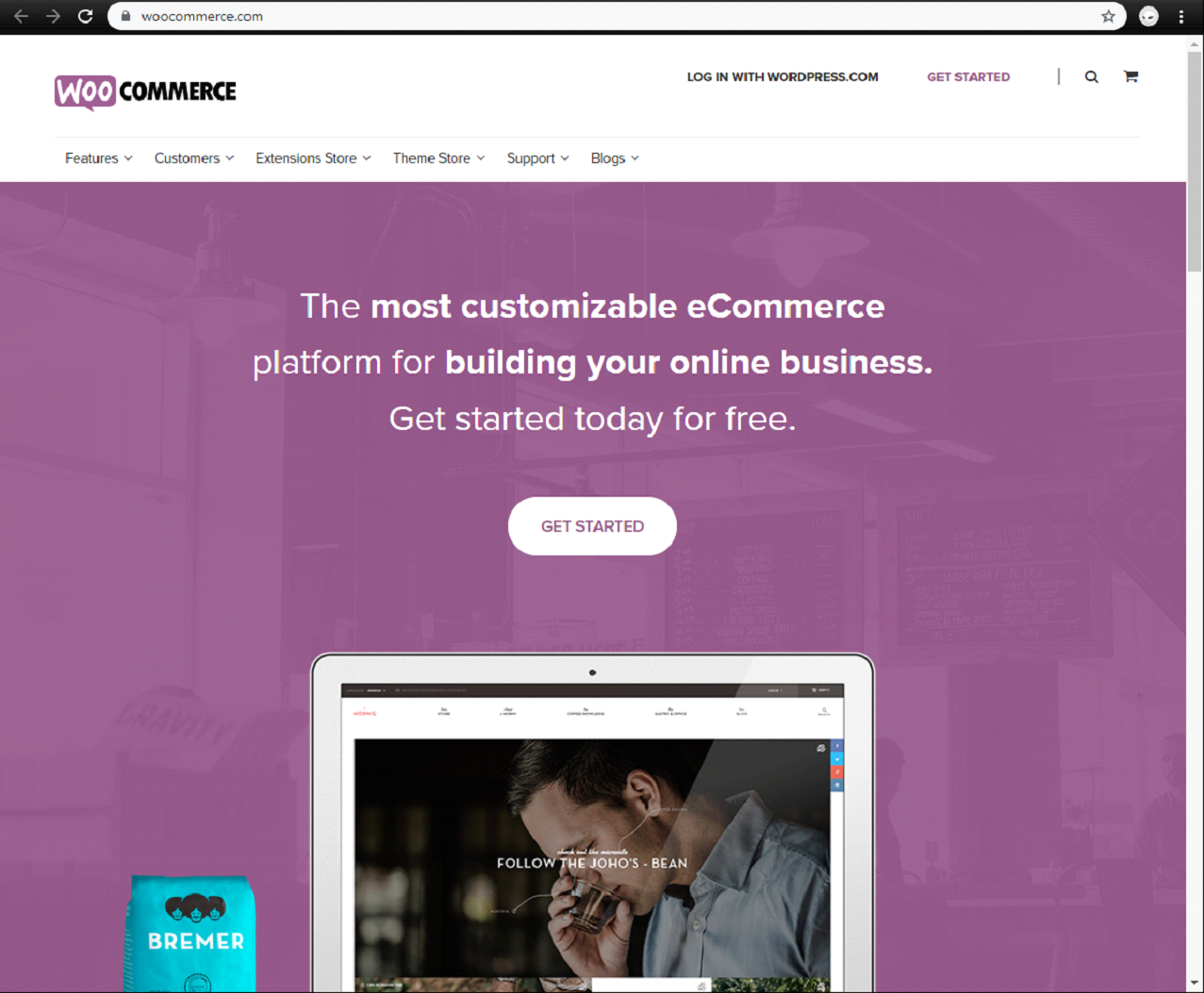 While Magento Community Edition is not as popular as WooCommerce, it is still well-known, with 200,000+ users. It lacks some features of its paid counterpart, Magento Enterprise Edition, but it’s still a good choice for anyone who is looking for a free open source platform specifically.

One of OpenCart’s catch phrases might as well be “appearance matters”, since it’s boasting over 2,700 different themes available for free use. The platform itself is used at just a little less than 600k e-commerce sites - and almost 5,000 of those are in the top-1 million sites on Alexa.com. Not bad for a somewhat small e-commerce platform.

OpenCart’s active and welcoming community is one of the key positive points, as well. Most of its user base right now is from the US (even though the platform itself was created in Hong Kong). That being said, OpenCart is a multilingual service that works with multiple currencies, offers 8 different shipping methods and over twenty payment gateways.

One of the most prominent features of OpenCart is its “turnkey” nature - meaning you don’t have to work with lines and lines of code from the beginning. 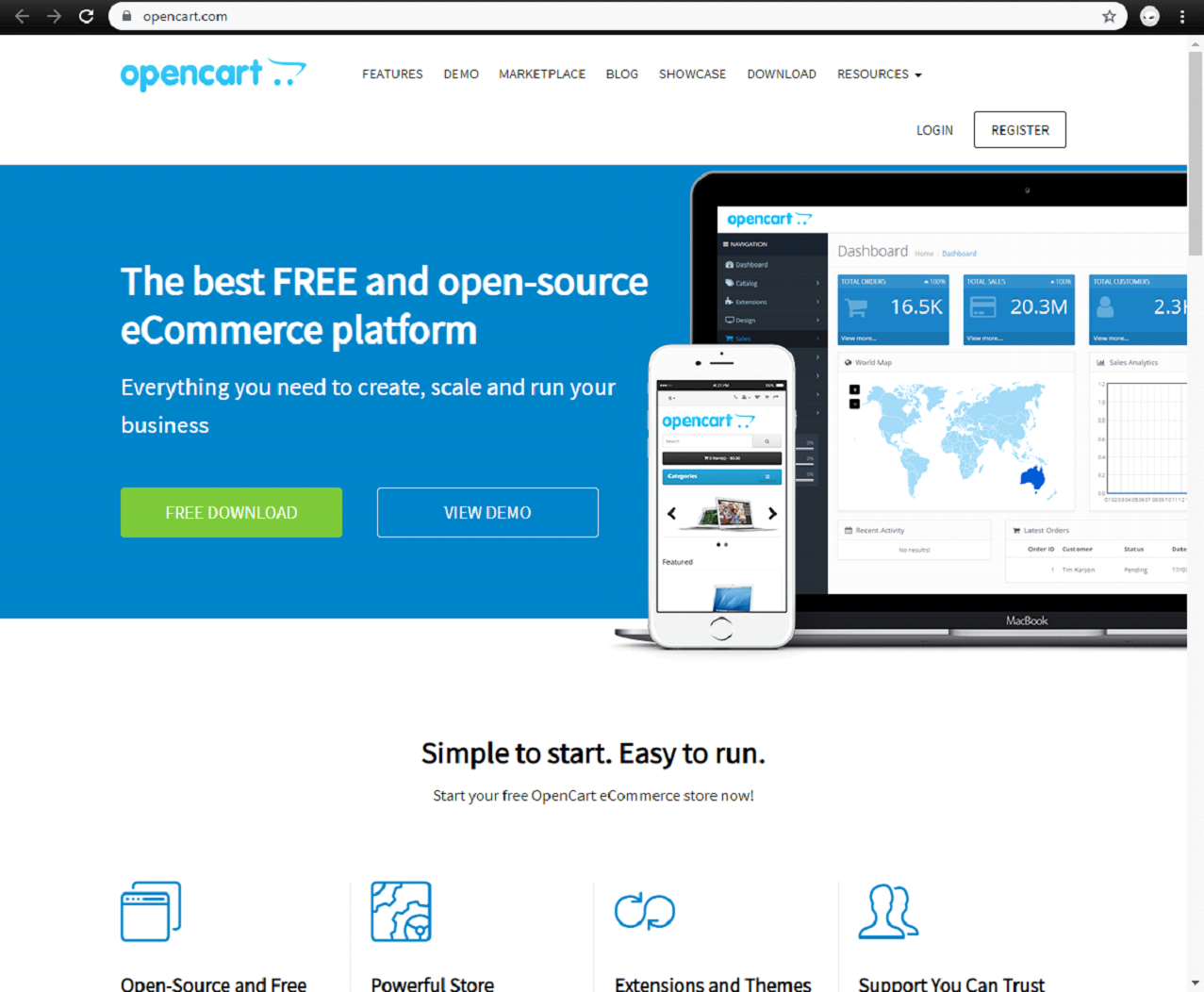 Drupal Commerce just might be one of the most sophisticated open source e-commerce platforms - it was created by the Commerce Guys and provides a lot of support for different languages and currencies.

It’s also always ready to work and integrate with a big number of 3rd-party applications. Currently it’s one of the few e-commerce platforms built on a CMS (on a Drupal Content Management System, to be exact), which equips it with a strong content marketing strategy right at the start. On the other hand, application support provided by Drupal Commerce is a paid feature, and it costs quite a lot of money. And it partially makes sense, since Drupal is widely used by large companies and enterprises. 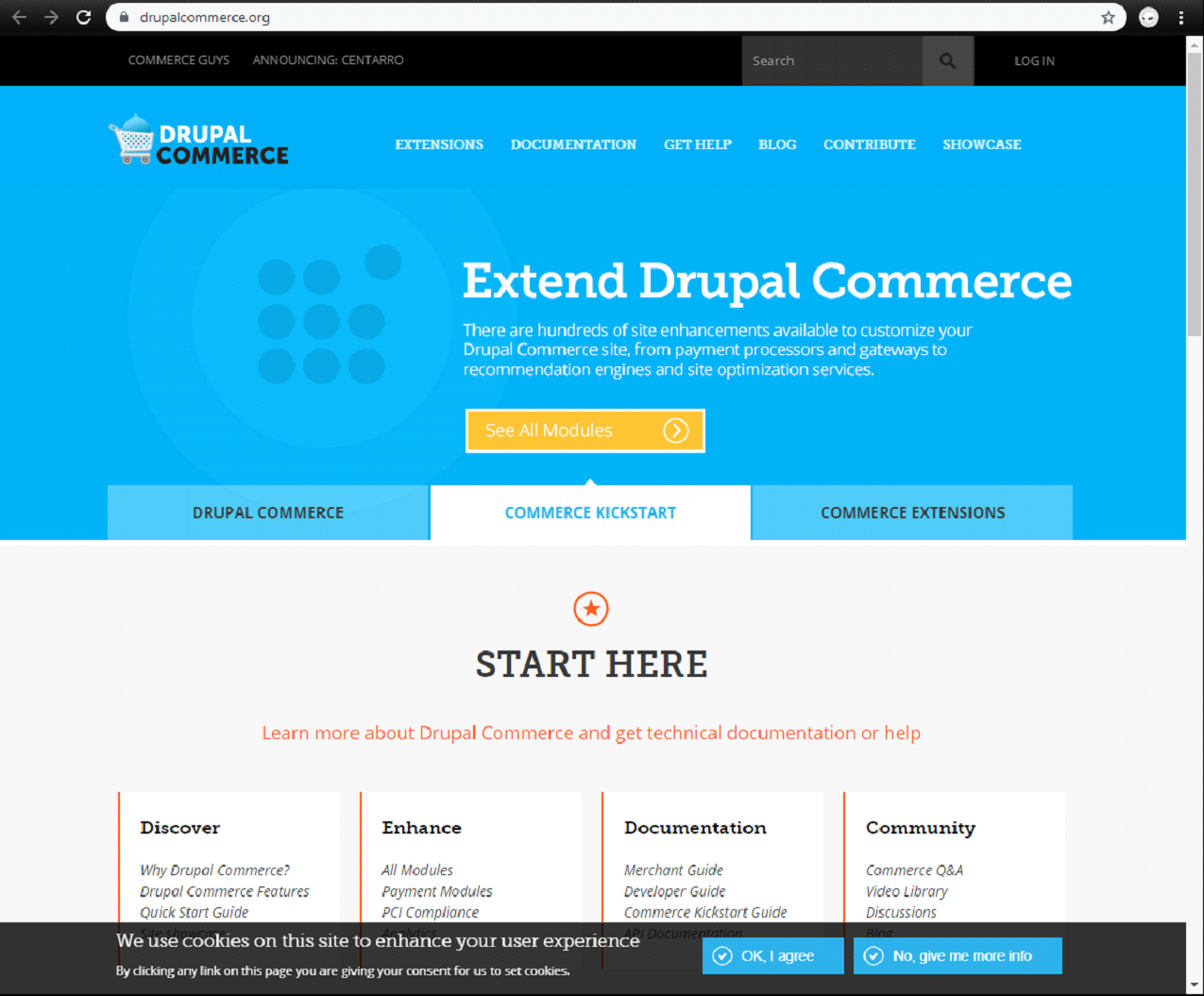 X-Cart is just a good open source platform in general. And it offers a lifetime license, too - basically no other free platform does that. As a PHP-based e-commerce platform, X-Cart also offers a lot of features and built on a solid source code.

Its customization flexibility is quite impressive, but you’ll have to manually write code to get the most of its capabilities. There’s also no transaction fees when using X-Cart, they have a pretty good support in both design and development, and their enterprise edition is quite interesting, as well. 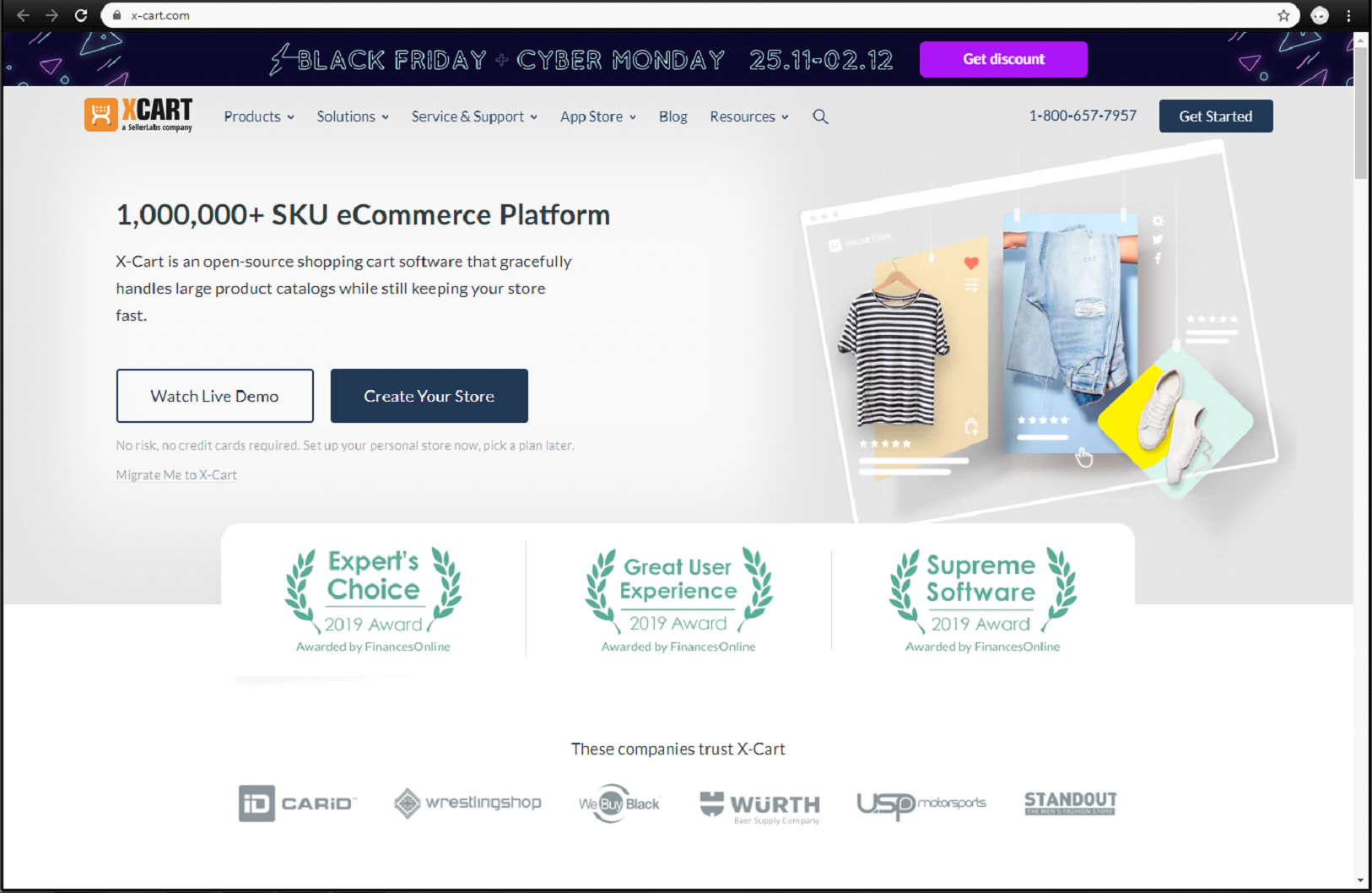 paGo Commerce is a platform that was built by the developers at corePHP, and it’s also open source. As a e-commerce platform it’s built on a Joomla! Ecosystem and has a lot of useful features and abilities that don’t require in-depth code knowledge, like extensive coupon system, a clean single-page checkout, paGO Quickpay for payments, etc. The main target of paGO is medium to large businesses, and it’s PCI-compliant, as well. paGo Commerce is also the only open source e-commerce system out there that has a real-time backend support. 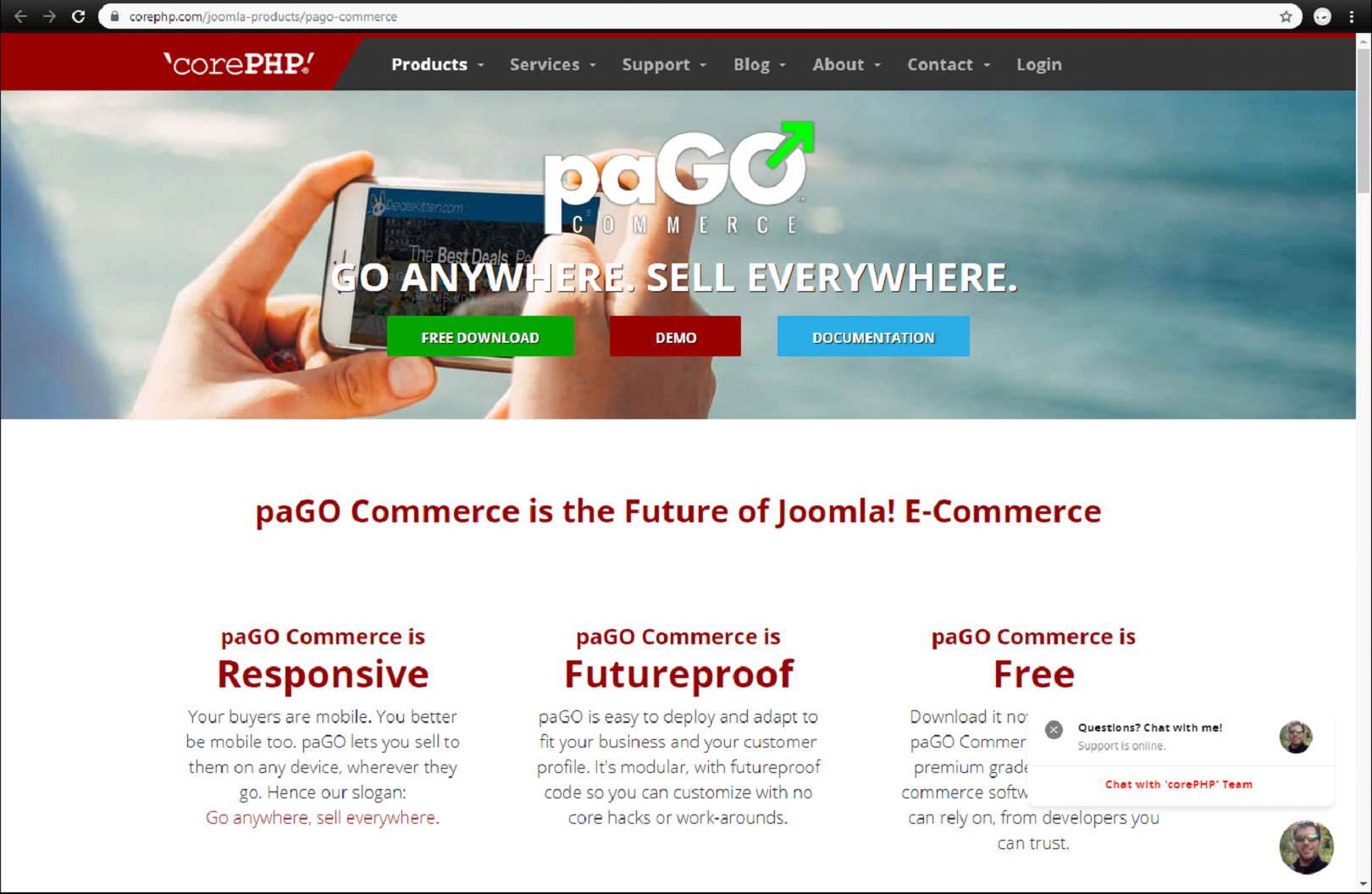 PrestaShop has quite a lot of users of their open source e-commerce platform - apparently, it’s over a quarter of a million shops. Their forum is also quite extensive, as well - with more than 850,000 members. PrestaShop as a platform is generally pretty popular, it was translated into 65 different languages in total and it’s spread over 200 countries as a platform. 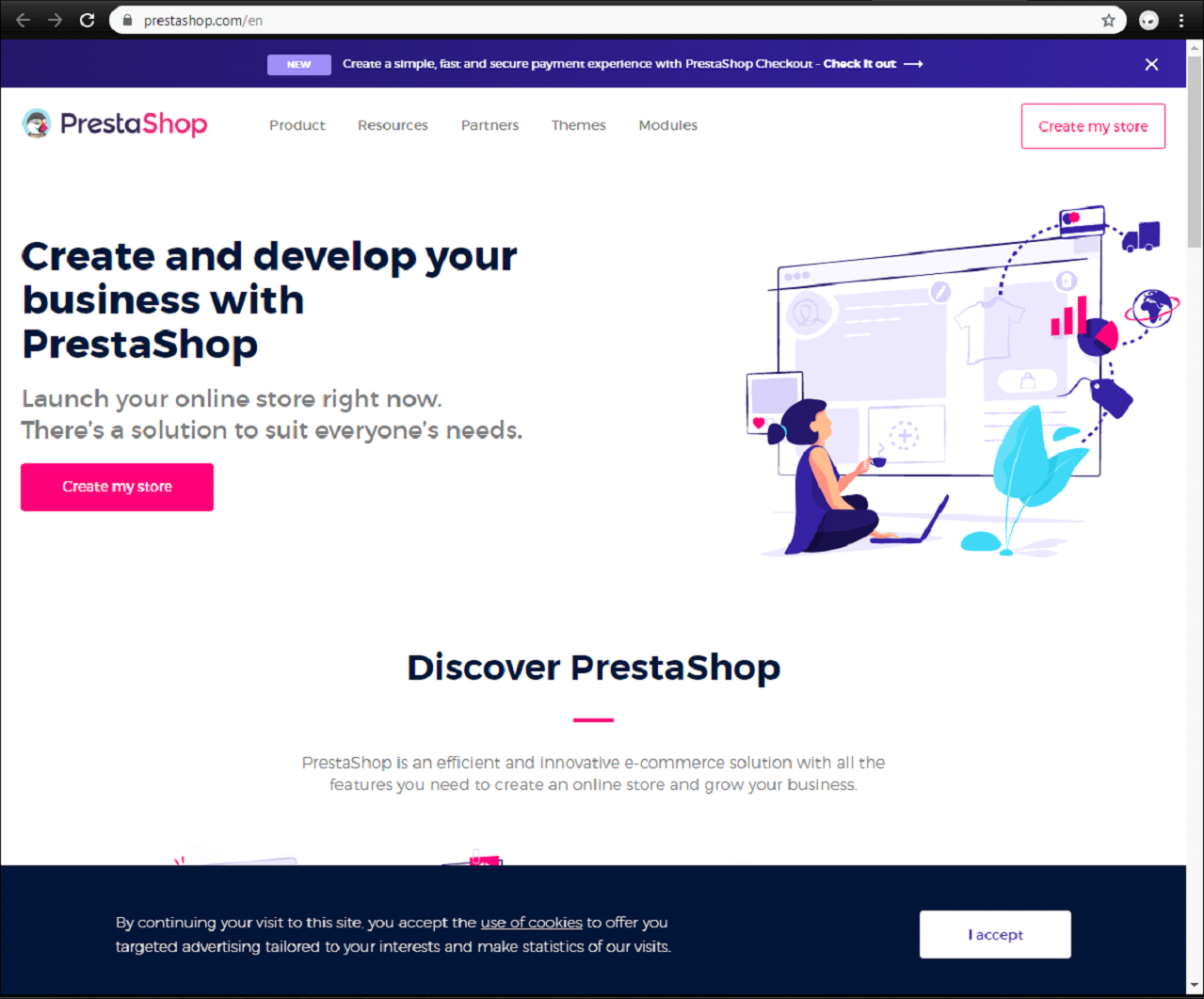 Spree Commerce as a platform is affordable and has a lot of features, it’s modern and visually appealing. Its development community is active and extensive, and there are over 45,000 stores that use it as a platform for their e-commerce needs.

The base of this platform is Ruby on Rails, and this is a questionable part - if you know your way around code or if you’re a developer yourself - Spree Commerce would work and scale wonderfully for you. If you’re not that good with code and don’t have any developers to work on it instead of you - you might have a hard time figuring your way around it. Spree Commerce has also been translated into over 30 languages.

JigoShop is a platform that is built on WordPress, similar to WooCommerce. That’s the main reason why a lot of people would have zero to no problems with navigating through this platform’s backend and changing it to fit their needs. Most competitors have a larger theme choice compared to JigoShop, but it seems to be working quite well despite all that, boasting over 500,000 downloads.

The less attractive part of JigoShop is its price for both themes ($35-49) and community support ($40 per month). But, as a plus side, there are quite a few features still in the works, as well as completely new version currently being tested.

VirtueMart is a Joomla!-based e-commerce platform that has an impressive number of features, has stores all over the planet and has an active developer community. The official user count of this platform is well over 300,000 - and almost one thousand of those are in top one million. The biggest markets for VirtueMart are Russia and the US.

It is worth noting that the VirtueMart dev team is very small - there’s from 3 to 5 people working at the project, at most. On the other hand, they gratefully accept developer input from their thriving community. It’s also quite old as a company - VirtueMart is a German company, and it’s working since 2004. The platform itself is also not really friendly to everyone who’s not a knowledgeable tech and code user. There’s also the fact that you can easily spend up to a small fortune of money buying all kinds of add-ons and plug-ins for your site. 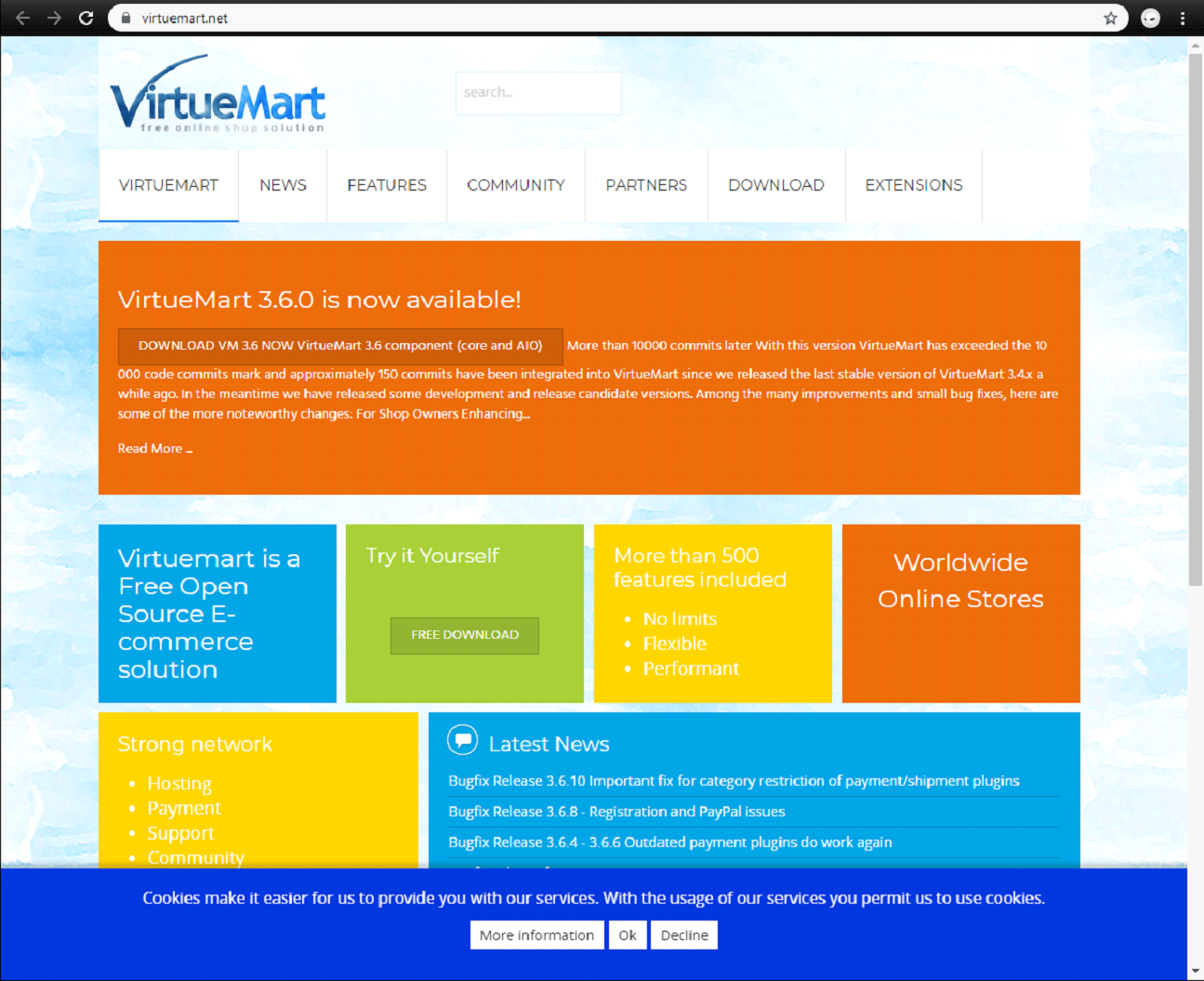 WP e-commerce is, as the name suggests, one more WordPress plugin. It prides itself on being the “original” e-commerce WordPress solution. Its download count is over 3M times, and the coding is quite easy to grasp.

Basically, CSS and HTML knowledge is all you need. You can also pay a bit of extra for expert’s support, or you can ask the community of this platform. 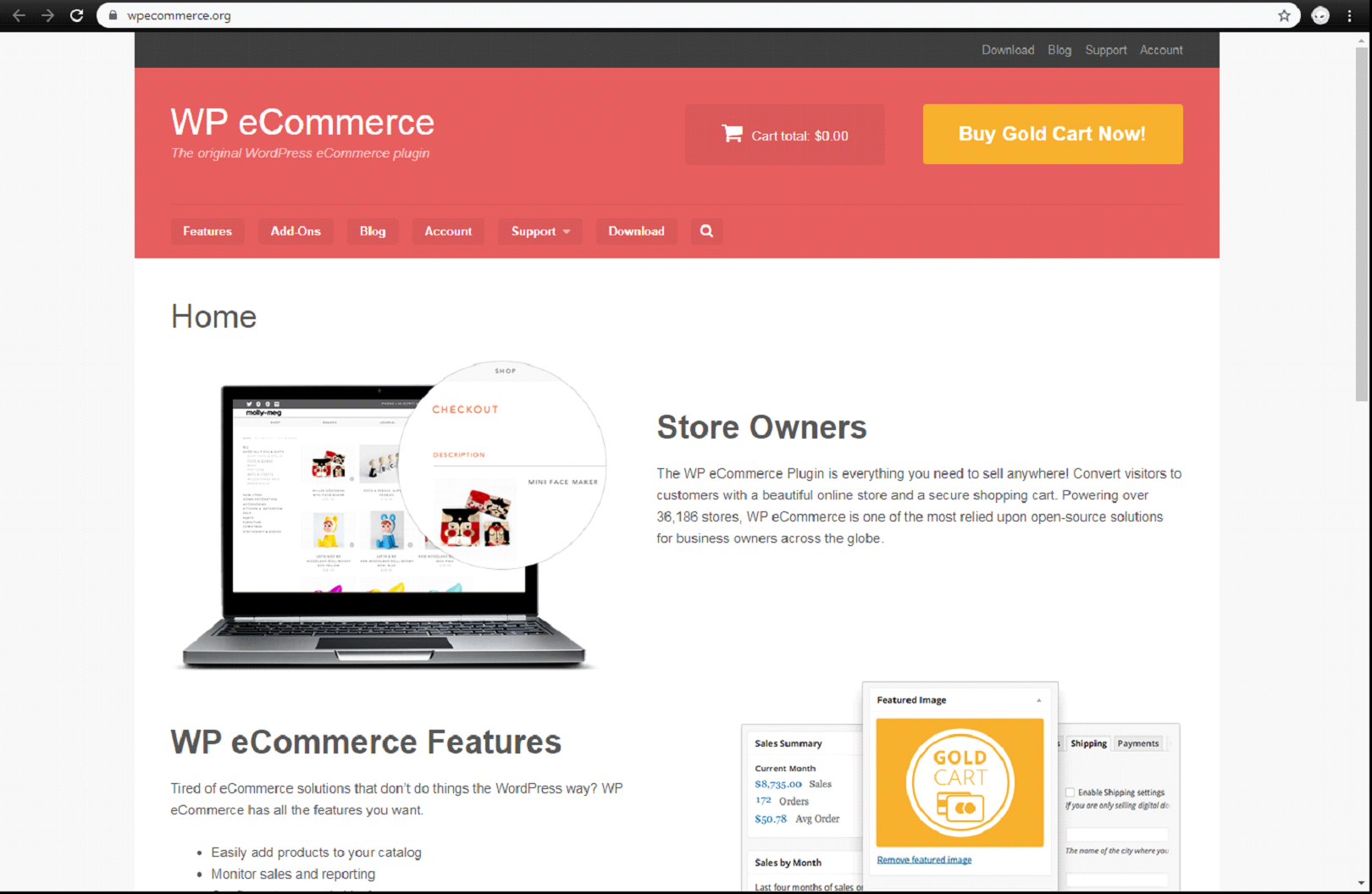 Ubercart is one of those platforms that’s been around for a while and forever stuck at the bottom of top 30 e-commerce platforms by user count.

Even when they keep their software updated - both Ubercart’s forums and demos can’t boast the same amount of activity regarding updates and such. As a platform, it’s built with Drupal in mind, and generally feels like it’s somewhat falling behind their competition. While their platform’s learning curve is pretty good and fast - there are a lot of choices that would be a lot better if you’re a medium-sized business or larger.

Unlike most of their competition, Zeuscart as a platform doesn’t even bother to hide their dev-centric nature. Instead, they embrace it. The platform’s landing page is riddled with enough acronyms to immediately scare anyone who doesn’t know their way around coding - GPL license, PHP, MySQL and a lot of other terms.

All in all, Zeuscart is a decent solution to have. It’s open source, free and their focus on the platform’s UX makes it somewhat less intimidating than most of the open source solutions and platforms.

Speaking of platform, Zeuscart was built using Bootstrap and it works best with small or medium companies. It has a decent community, quite a lot of features, and has a free month-long trial, followed by paid access. It could be a platform worth considering, but both website and platform’s social media accounts seem to be abandoned since 2014. You can still download the platform itself from their website, though.

As a platform, CubeCart is decently popular around the globe. It’s entirely based on templates, which makes it look better than the most when using mobile devices and such. The list of proficiencies goes on - social media plugins, unlimited products, great customer support and a lot more. The platform itself sees themselves as a part of a new generation of open source e-commerce platforms. On the other hand, there are some limitations to it. You can’t get support over the phone, for example (even if you can get help on the site itself).

CubeCart scales decent enough, but it’s definitely not equipped to work with huge companies and businesses. There’s also an integration possible with several popular applications, like MailChimp - but it’s still nowhere close enough to OpenCart’s numbers when it comes to third-party integrations.

Virto Commerce is a professional enterprise business solution and an extensively flexible platform in general.

The highlights of Virto Commerce’s unique features are the complex catalog management with a lot of useful tools, a CMS system of their own making and a lot more. You can easily control each segment of your pricing logic with Virto Commerce’s flexible pricing management. And you can’t forget about extensive order controlling that is also included in the same package, allowing for easy feature integration, no matter how simple or difficult your enterprise workflow is. 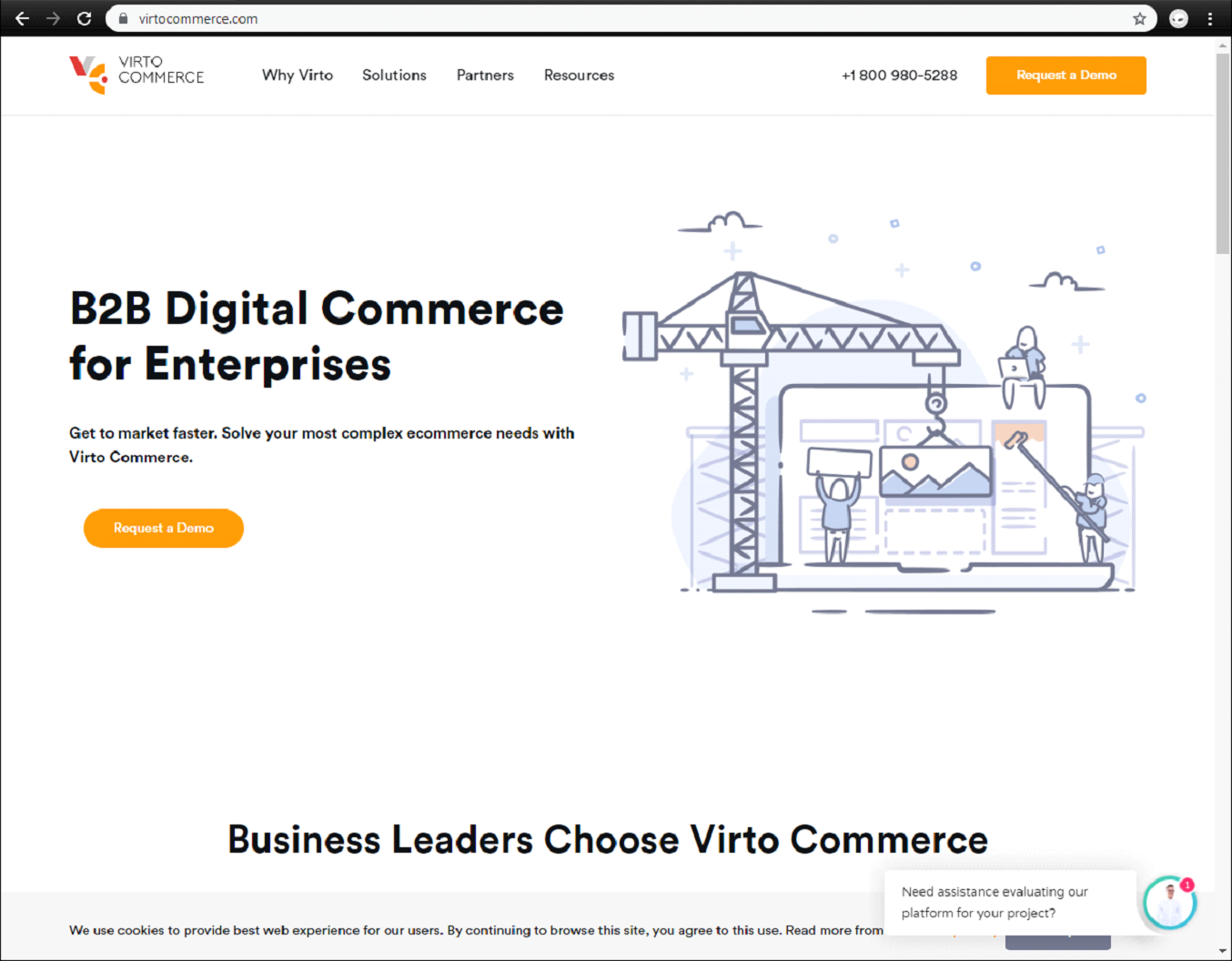 Is it actually free?

One of the first steps in choosing a specific open source e-commerce platform for yourself is being honest with your own coding skills, as well as the budget you can spend on hiring someone with sufficient knowledge. One of the biggest benefits of any open source platform is always the worldwide community of developers and other people working on improving specific software.

On the other hand, most of the time it’s freemium plans that have the best technical support, up to a team of full-time paid developers ready to help you. If you don’t have a paid option of a technical support - you’re highly likely to struggle if you found a new bug or something similar.